Strasburg Does an Ohtani ... and a Strasburg 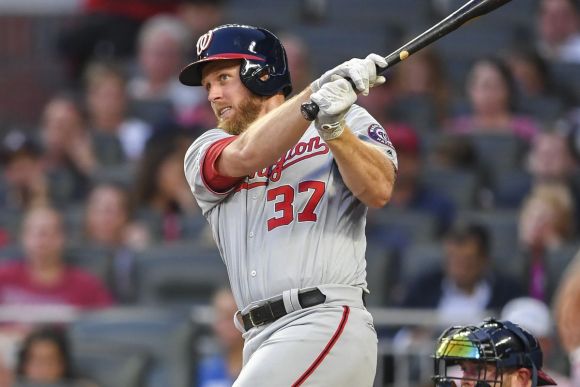 After a horrible start to the season, the Washington Nationals had to go balls-out just to get back into the playoff conversation.

Since snapping a five-game losing streak on Fri 24 May -- the Marlins conveniently came to town -- the Nats have gone 22-11 and moved within striking distance of the NL East-leading Atlanta Braves.

A leading reason for this is their star players are stepping up.

They're actually rather glowing for the club's ace, Stephen Strasburg.

Dude's record -- an intangible, of course -- was 11-4 coming into their big series with the Braves, and it's safe to say he went above and beyond the call in the opening game, a 13-4 victory: The pitching line is vintage Strasburg, of course.

His plate production, though, exceeds what would be a good season for him, with a three-run bomb being the cherry on top:

This performance brought on an expected cascade of red-headed stepchild stats:

Good stat from Nationals PR/@EliasSports: No pitcher in Nationals/Expos franchise history has had two hits in an inning until Stephen Strasburg did so in the third tonight.

Stephen Strasburg's 5 RBI are the most by any pitcher in a game in Nationals/Expos franchise history.

Stephen Strasburg of the @Nationals had 3 hits and 5 RBI at the plate and 7 strikeouts on the mound tonight.

Damn, baseball is so good at that stuff.

This all conjures memories -- and anticipation -- of Japanese sensation Shohei Ohtani, who's making himself useful while recovering from the dreaded TJS disease.

Now, in the name of versatility, a less-heralded two-way dude is making himself known. That'd be Cincinnati's Michael Lorenzen, who's been around for a couple of seasons. He hurled and homered in a game back in 2016:

This year, Lorenzen had a game where he played CF and then came on in relief on Opening Day. Ohtani's a starter who's only a DH this year while his arm recovers.

The Nats, of course, have no intention of Strasburg pulling double duty. They're happy settling for the novelty of it all.

Odds are, so is Strasburg.