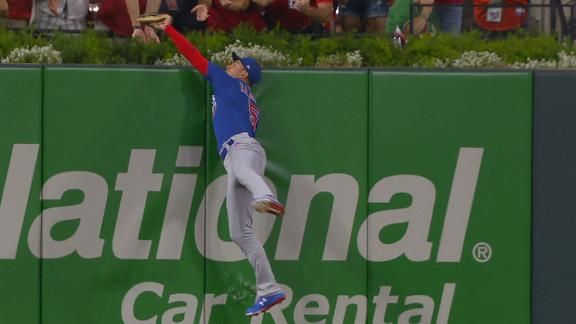 The MLB regular season may be wrapping up this weekend, but that doesn't mean the cool shit just stops.

Players on teams that've been eliminated from post-season contention are still allowed to ball, if properly motivated.

Surprisingly, the Chicago Cubs are one of these unfortunate teams.

The Cubs' reserve outfielder and defensive specialist executed one of those over the wall rob jobs last night in St Louis:

When the moon hits your eye,
like a big pizza pie...

It sure the hell is!

We're all pretty excited about that grab, with the exception of Yadier Molina, of course, who was under the impression that he'd homered.

But hey, we've seen enough of those this season.

This catch has us reminiscing about previous wall climbing antics.

Unfortunately, Almora was forced to leave the game later with a leg injury of some sort, but not before becoming award-eligible.