Mike Trout Sure Could Use Some 2020 Dingers

Published on 8-Apr-2020 by Alan Adamsson 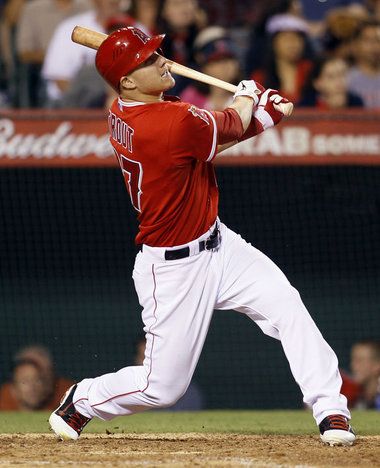 Somewhere around 1974, the public persona of Henry Aaron morphed into Hammerin' Hank.

That was a nickname he'd acquired during his rookie year in 1954 for the obvious reason. Only writers and PR dudes used it, though, as Henry was just Henry as he kept pounding out bombs, 30-or-more for 15 of his 23 MLB seasons.

In fact, dude only hit fewer than 20 in only three seasons, his first and final two.

It was on this date in 1974, though, that everyone began referring to him as Hank, except for traditionalist Vin Scully, who'd always known him otherwise:

To purists, Aaron still is.

Bonds practiced what he preached with his minimalist mechanics.

They enabled him to pound it hard, far, and often.

However, questionable choices have turned him into a villain.

Which is why more than Los Angeles Angels fans are pulling for Mike Trout to become the new Dinger King. The very real likelihood of his amassing 763 home runs is just one more reason why the fate of MLB's 2020 season looms large in their minds.

Seamheads are all over how vital 2020 can be to Trout's career total.

At this point, it's realistic to assume dude's got a strong chance of matching Aaron's time in the majors. Based on FanGraph's projections before this season began, Trout's place in homer history hangs in the balance of how much of it or even whether it's played:

Given that Trout's basking in his prime right now, this indeed coulda been the year he'd have gone off for 60.

Instead, he's gotta settle for going deep at the driving range:

Currently, here's where Trout's career compares to Aaron's at the same point:

Trout can only roll with the times. They'll be nothing like what Ted Williams lost, records-wise, when he spent five years as a fighter pilot in the Korean War, and truth be told, Trout probably doesn't care as much about surpassing Bonds as he does winning a World Series ring.

Of course, the Angels need to make the playoffs for this to happen, something they've only done once in his career. That was 2014, and dude was 1-12 as Kansas City's swept the Halos in the ALDS.

Trout can't wait to replace that with better memories.

Aaron got his ring by leading the Milwaukee Braves over the Yankees in 1957. Bonds got to the Series in 2002, but the Giants lost to the Anaheim Angels, of all teams. Trout should still have at least a decade to earn one, but time has a way of flying, kinda like that golf ball did.

How long before it's a baseball instead? Lotsa baseballs. There are 30 teams waiting for the season to open up in some way, shape, or form, but it could well be said that none are more restless for it to happen than the Angels.