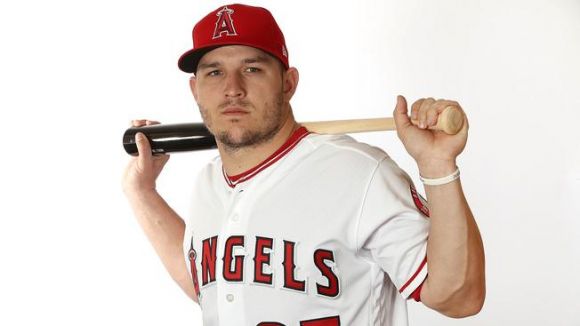 Baseball still has a problem with Mike Trout.

Dude just plays the game and does cool human things away from the spotlight.

The best he can do for a home page is a Facebook account. How far behind the social media times is that?

After all, dude's a millennial. Hasn't he heard yet that, anymore, Facebook's just Instagram for old people?

But look who's laying waste to it ... good ol' unassuming Mike Trout!

Talk about walking softly and carrying a big bat ... when it comes to Wins Above Replacement (WAR), dude's demolishing revered standards set by Hall of Famers who had no idea they were doing it because WAR didn't exist back then and, frankly, they were irreplaceable: Talk about putting paid to all those back in my day rants.

Of course, there are sabremetric stats ad nauseum these days, but for now, let's stick with WAR. It's a seamhead's way of boiling down a player's all-around accomplishments to a lone figure. It's got cred for doing so, too.

Think of all the game's legends, consider their career results, and then look at where their WARs rank: Dude's halfway to the top in less than half the time it took the others. He's currently 27 years old.

Yes, Trout does look human every other leap year or so, but the rest of the time ...

There's something refreshing about the fact that Trout doesn't do the soap-opera cyclone that the NBA players and media feed off or the circus that bestows personality upone NFL players.

Instead, dude just does the Old School thing and lets his game speak for itself, and as his WAR indicates, he's in damn fine company with some of the Old School's best.

Maybe his assault on sabremetrics will enable more of today's fans to do the Old School thing themselves and elevate Trout to the level of stardom he deserves.