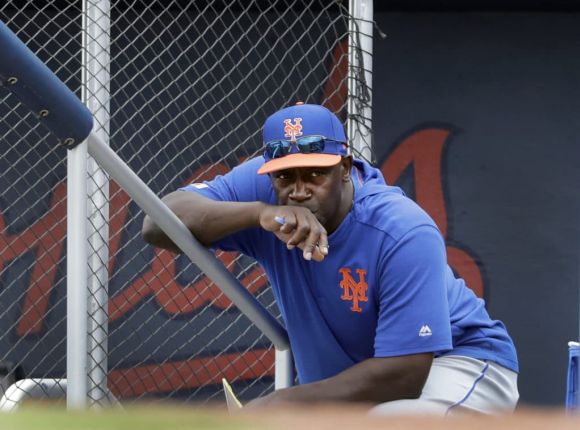 Inexplicably, Chili Davis seems to be struggling with the hitting aspect of his hitting coach duties.

Davis is in his first season with the New York Mets, who hired the former slugger for reasons passing understanding after he'd been dismissed from the same position with the Chicago Cubs after one season.

Chicago had hired Davis during a period when they were replacing positional coaches like it was an involuntary bodily function, but the Cubs' offense really hit the skids under his possibly flawed eye in 2018.

Of course, the big bowl of Chili blamed his complete failure on the dubious listening skills and short attention spans of his millennial players.

While there may be some truth to this theory, the real reason for the Cubbies' offensive struggles last year are probably linked to Davis' disdain for the popular launch angle concept sweeping MLB at the moment.

Apparently, Chili decided the Cubs should abandon their previous see-ball-hit-ball-far routine in favor of a contact approach, something that ultimately failed in spectacular fashion.

But surely this was just an aberration, and Davis is still a competent professional baseball coach.

New York certainly felt this way, so we can only assume that the Mets have made significant progress with the sticks.

Yeah, that was definitely footage of the Mets losing, 4-3, to the Brewers in 18 torturous innings at Miller Park.

The month of May hasn't been kind to these dudes, as the team has scored a meager seven runs in five games.

Not surprisingly, the club has dropped four of these games, with the lone win coming only because Thor plays baseball.

This hire was actually greeted with some optimism before the season, but things are looking pretty grim at the moment.

We're quite sure Chili's a nice enough dude, but he seems to bring only plague and pestilence with him, as opposed to useful hitting techniques.