The Mighty Thor Heroically Beats the Reds All by Himself 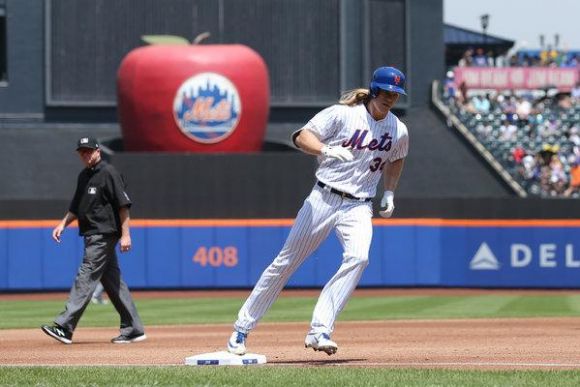 The New York Mets have been in a catatonic stupor for several days now.

For whatever reason, that vaunted Cincinnati Reds pitching staff has flummoxed their offense, providing precious little help to their own rotation.

However, the Mets' lineup could only muster five hits against the likes of Anthony DeSciafani and friends in a 1-0 home loss.

Noah Syndergaard was clearly taking notes during this shitshow, probably realizing he'd need to be something beyond human the following afternoon to have any chance of winning the game.

Well, let's see how he fared:

It's borderline tragic that this dude would be forced to do so very much just to win an MLB game in early May, but such is life.

As we recently learned, the Mighty Thor isn't worried about anyone or anything, and is willing to accept the enormous burden, consequences be damned.

He'll even humor mascots, if necessary.

This performance really was something though, creating questions like this one:

Which @Noahsyndergaard was your Amazin’ Met of the Game?

While the mound work is obviously stellar, it was undeniably cool watching Thor go oppo for the only run of the game.

In fact, dude's got two homers already this season, and once even homered twice in the same game.

Anyway, let's hope the Marvel staple isn't forced to do the whole one-man show thing again next time out.

That's probably too edgy for MLB.