Lorenzo Cain's a Human Cheat Code in the Outfield 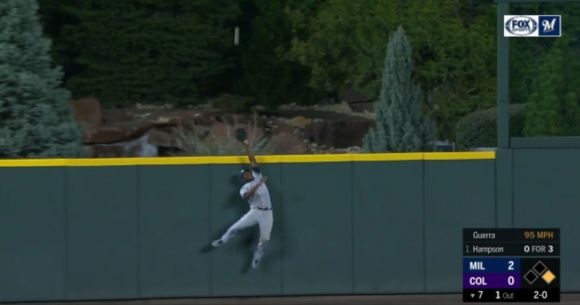 The body of work compiled by Lorenzo Cain in various MLB outfields will one day be included in curriculums at the university level.

Dude can practically cure disease with that glove of his.

Forgive the hyperbole, but it's just all so ridiculous.

The Brewers CF was at it again last night in Colorado, making the spectacular appear routine.

This would be the first one:

Now, you may have noticed that this was a 1-0 game in the 6th inning when dude laid out for that thing.

If the ball gets past him, the game is tied, but no matter.

The rest of us are terrified for him.

In the very next inning, Cain got busy again, this time climbing the damn wall:

As you can see, dude leaves both pitchers and broadcasters completely incredulous with this stuff.

The Brewers eventually lost, 3-2 in 10 innings, but Lorenzo did everything he could.

And we'll leave you with this terrible injustice:

Frankly, the fact that this man doesn't have a @RawlingsSports Gold Glove is embarrassing. #MKEHistory pic.twitter.com/gLJV64AAFx