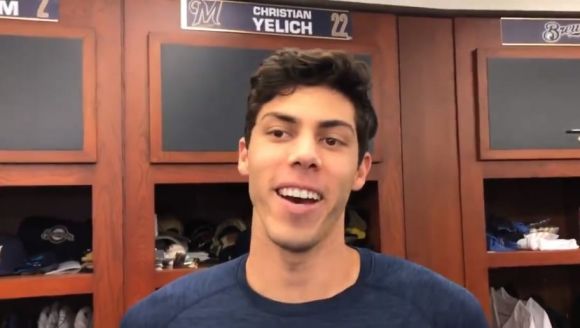 The ancient art of trolling seems to reach new levels of creativity with each passing day.

Whether it's playful or mean-spirited, it's never boring.

We tend to gravitate towards troll jobs that showcase originality and outside-the-box thinking.

In that regard, we'd like to acknowledge the efforts of Christian Yelich, whose prodigious numbers on the field are matched only by his prowess in the troll game.

While that isn't Yelich holding a trophy, the reigning NL MVP did participate in the annual ESPN The Magazine Body Issue, which features impossibly fit athletes wearing nothing at all.

At least they gave him some props to play with.

Of course, the prudes are always lurking in the dark recesses of the web, just waiting for a chance to be outraged.

One such person named Roxane couldn't believe that Yelich would agree to a naked photo shoot with no thought for the children of the world.

Fortunately, the scandalous Brewers outfielder was made aware of her tweet before it was deleted:

Before we continue, here's some context on the uptight Roxane:

Deep down, we already knew that.

Now let's get back to our regularly scheduled trolling, already in progress:

Perhaps Roxane should take the night off from walking the streets for money and read a damn book.