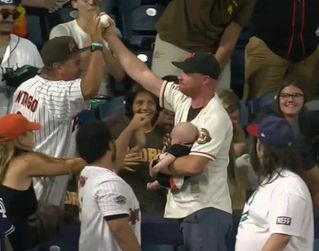 Every once in a while, there are things that take place in the crowd that overshadow the exploits of the obscenely wealthy athletes on the field.

For example, the other night in San Diego, there was a Giants fan in the left field bleachers who somehow caught a baby while holding a ball.

Perhaps it would be easier to show you:

We're still not sure if that was an act of heroism or child endangerment, but it was impressive nonetheless.

Of course, what really made the play sing was the baby remaining asleep, although dude should probably check that diaper.

Pablo Sandoval is certainly a fan.

Pablo Sandoval on the dad who caught the homer while cradling the baby: "That's the most impressive thing I saw." More impressive than Pablo's home run? "Yes! He didn't wake him up."

Apparently, dude became an instant celebrity in the bleachers and was subsequently hounded by an adoring public.

Fans are posing for pictures with the dad/baby.

And Pablo, being the cuddly Kung Fu Panda that he is, spent some time with him and the baby the next day.

By the way, Sandoval is making a habit of this extra-inning homer thing recently.

Here he is walking off on the Cubs earlier this week:

Tragically, that grown man in the front row with a glove and no baby was unable to make the play.