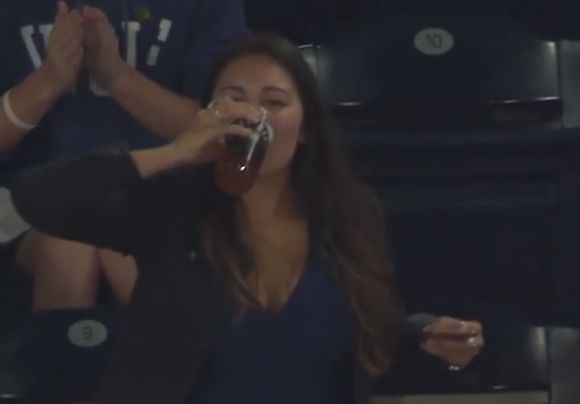 Yogi Berra's famous observation about déjà vu all over again has been confirmed once more.

Thank a fan who was recently discovered at PETCO Park.

During a complete bludgeoning of the San Diego Padres by the Atlanta Braves, something quite remarkable happened.

But not on the field.

That may very well be the best thing ever.

That clip should be placed in a cyber vault for posterity, although that awful pun about the bad hops provided by the clever broadcast team almost ruined it.

Feel free to mute those buffoons if you find it distracting.

Of course, this sort of thing is not without precedent.

Here's one a few years back at Wrigley Field, also involving the Padres.

Yeah, she's not bad either.

Then there's the Seattle version of catch-&-chug from 2015:

And one more for good measure.

Obviously, this was also a dude and not an actual foul ball hit into the stands, but what the hell.