George Springer Introduces Himself to the Centerfield Wall at Miller Park 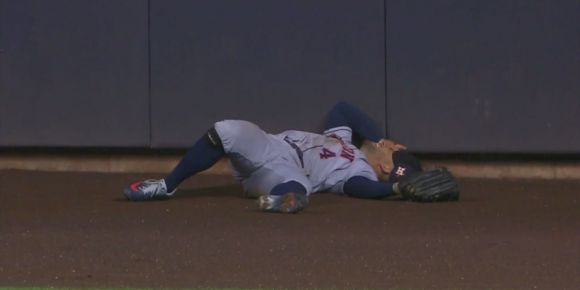 Playing centerfield in MLB can be quite challenging, especially when taking quirky ballparks into consideration.

However, it's just difficult in general, requiring a combination of speed, skill and courage.

George Springer put all three on display the other night at Miller Park.

His Astros were in town to tussle with the beer enthusiasts when Springer decided to have a quick stop and chat with an inanimate object.

The wall was just as rude to George.

He may have won the battle with that incredible catch, but that damn wall took the war.

In his haste to get back there, Springer clearly misjudged how close he was to the wall, and the back of his head did that awful snap thing.

Somehow, he gets to skip the concussion protocol:

George Springer "may need a day or two" off before returning to @Astros lineup, Jeff Luhnow said on @SportsTalk790 moments ago, but initial tests on Springer's head and neck were encouraging. His status for Thursday's game may be determined tomorrow afternoon. @MLB @MLBNetwork

Well, that's certainly good news for both George and the Astros, because dude's really good at baseball.

We all saw George Springer leave the field during tonights loss vs the Brewers. After the game, AJ Hinch spoke about his leadoff man.

Day off tomorrow, back at it Thursday night. pic.twitter.com/LHYiLcHFPX

We also have some exclusive on-field dialogue between Springer and the trainer: