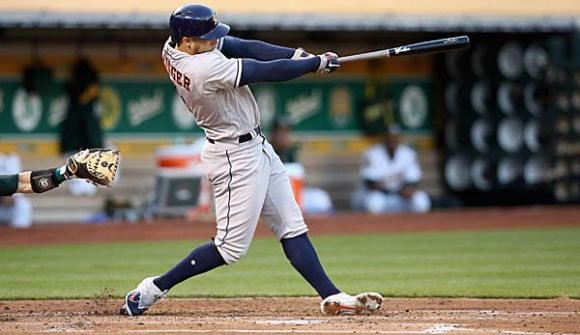 Things seem to be going pretty well in the world of George Springer.

The young Astros leadoff man and conquering World Series MVP went and had himself a night in Oakland.

Springer toyed with the A's pitching staff, collecting six hits in a 16-2 curb stomping by the 'Stros.

If six hits seems like a lot for one player in one game, that's because it is.

Let's have a look at this dude doing some work.

Even though two of the hits were infield singles, Springer gets bonus points for that home run he absolutely destroyed to left center.

You'll also notice that he missed out on the cycle because of the elusive triple, but let's not pick nits here.

And how about an honorable mention to Oakland, as they looked really awful in that highlight montage.

It turns out Springer also pulled off an uncanny Joe Morgan impression, which is reason enough to be proud.

Morgan had been the only Astro to record six hits in a game, doing so in a 12-inning contest way the hell back in 1965.

Of course, Springer got his six hits in a regulation game, so there's that.