Published on 8-Oct-2021 by Alan Adamsson 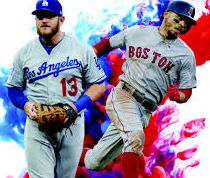 No matter how entrenched it is in 21st century baseball, it's still weird to see teams who spent 162 games to earn a playoff spot have their post-season whittled down to one damn game.

Especially when one of them racked up 106 wins over the course of that season.

What's more, it took Chris Taylor making the most of a hanging slider to earn a walk-off win and ensure that the Los Angeles Dodgers would actually survive to play another day.

Dude had to wait his turn, of course, but these are Dave Roberts' Bums, and he manages like he doesn't want to offend any player's mother. All the position players are gonna get into the action sometime or somehow.

Until his ninth-inning AB, the Dodgers and St Louis Cardinals were locked in a classic pitchers' duel. Redbirds ace Adam Wainwright and St Louis native Max Scherzer ducked and dove around baserunners -- St Louis went 0-11 with runners in scoring position; Los Angeles stranded 7 overall -- but only yielded a run apiece.

The Cardinals had come into this one-&-done as white-hot as any club had been in recent memory, posting a franchise-record 17-game winning streak that took them from the season's scrap heap to center stage.

With so many chances in this game, though, key hits didn't happen, and Taylor's heroics put paid to LA's 3-1 victory:

That was only the fifth walk-off in MLB post-season history, the most famous still being Pittsburgh's Bill Mazeroski against the New York Yankees in the 1960 World Series.

Taylor was transformed by the Dodgers hitting coaches after he arrived from Seattle in a trade damn near nobody noticed. Dude's known glory on many occasions but ended this season in an 8-72 slump. Ironically, he got into this game as a defensive replacement.

That's not how he's gonna be remembered in this one, though.

Xander Bogaerts' two-run bomb was at the core of a Gerrit Cole meltdown while Nathan Eovaldi kept a cork on New York's potent attack. The telling stat that distinguished the two pitching staffs was Boston not walking a batter while the Yankees issued free passes to seven ... and four of them scored.

As in, margin of victory.

After that pivotal sixth inning when Giancarlo Stanton just missed clearing the Green Monster and Aaron Judge wound up getting thrown out at home as a result, the Yanks went 1-10 the rest of the way.

And that, as they say, was that.

New York is far and away the leader in World Series Championships with 27. To show how dominant that it, second place on the all-time title list is the Cardinals with 11.

But the last one happened in 2009. That's an eternity in Steinbrenner years.

The good old days were indeed good to them, but they're also old.