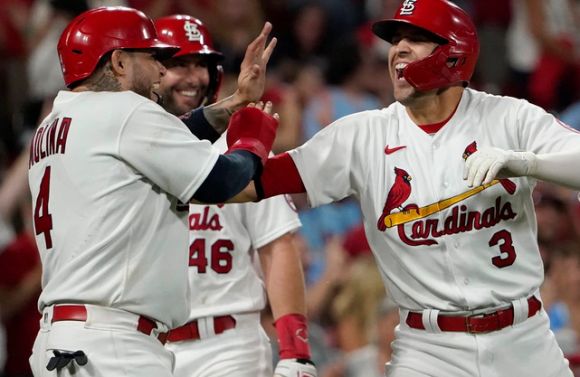 This is a not a case of being fun while it lasted, even though it was.

It was more like coming outta nowhere to lock up the National League's second wild card slot and quickly doing a pivot to prepare for winning it.

After 17 straight victories, the St Louis Cardinals finally lost a battle, but they won the war that was in front of them.

Dudes did it with the sorta defense that's become a franchise trademark again, with just possibly the game's best first- and third-basemen bookending a keystone that's been beyond solid.

A couple of spiffy twin-killings that helped keep the streak going serve as testament.

Here's one that came during Victory No 15, which included CF Harrison Bader participating in the rundown with LF Tyler O'Neill wandering into short to take it all in:

Then there was the one they thought they had during their 16th that had a few reaching for the rule book:

What ultimately became of the chaos at second base was this:

Only in baseball. That's how long winning streaks keep going.

Hot players help, too. Like O'Neill figuring out how to keep his swings limited to pitches destined for the strike zone and then letting his He-Man slice through it quickly, with Masters of the Universe results:

Toss in the fact that low-key pitching additions of Jon Lester and JA Happ to the rotation with BJ McFarland and Luis García to the bullpen gave the Cardinals four slingers who filled up the zone -- cutting down on walks and HBPs that plagued the club -- and the elements of a winning September came together.

True, but the streak added just one more victory before manager Mike Shildt let the bench players get some action, resting his regulars in preparation for a one-game Wild Card playoff in Los Angeles.

It took this streak to confirm their appearance in the post-season, but now, they're gonna need a single win to keep it going.

No matter how hot St Louis is, with the loaded Dodgers waiting for them, that could be a feat.