Derek Dietrich Refuses to Stop Absorbing Baseballs to His Anatomy 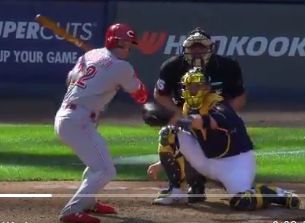 Boy, that Derek Dietrich is quite the character.

You may recall the Reds' rabble-rouser standing at home plate for what seemed like hours watching his majestic home run sail into the drink in Pittsburgh.

The Pirates didn't care for that none too much, so the usual pleasantries were exchanged on the field.

Well, Dietrich has now decided to continue his tour of the NL Central by screwing with the Brewers, and he's found a pretty creative way to do it.

The Reds were at Miller Park this past weekend for a four-game set, which ultimately ended in a split.

Dietrich spent most of the series on base, particularly in the first two games.

Hey, let's find out how he did it:

Yep, dude got plunked three times in the Reds' 11-7 win on Friday, scoring four runs, which is a very unusual MLB record.

Combined with the two HBP's on Thursday and another on Saturday, that makes six in three games, if our math is indeed correct.

Now this is nothing new for Dietrich, who's been grazed a whopping 108 times in his career, which really seems like a lot.

Despite this sordid history, the Brewers were just not vibing with his act, strongly insinuating that their new nemesis was taking liberties with his rogue elbow pad.

Anderson on Derek Dietrich, who tied the record with 3 HBPs tonight and scored 4x: "The first one I hit him, but the next one I threw a cutter in there and I don't think it would have hit anybody else. ... That's kind of his game. We need to figure out what to do to get him out."

Hmmm, a knack you say.

The Brewers are probably using a different word. 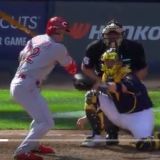 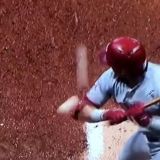