Cardinals Hit by Covid; What Now? 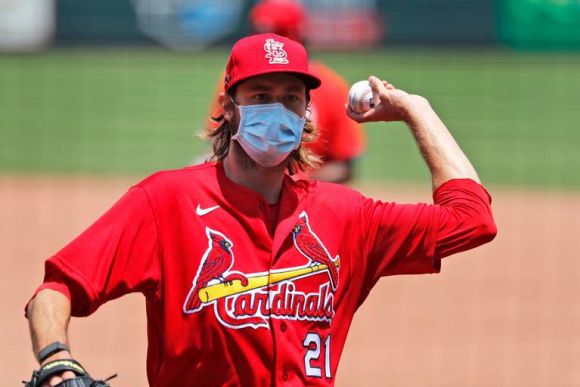 So what's the deal with MLB?

The Commish & Crew were even triumphantly brandishing that damn 133-page protocol manual that, for all the good it's done so far, may have been more useful as a doorstop.

In this season from hell, nothing says yeah, right quite like the Miami Marlins. Dudes have taken a Covid-kinda strategy to lead the NL East.

MLB has accepted the inevitability that a number of teams won't make it through a 60-game schedule due to time constraints and have decreed that best winning percentage will be the ultimate criteria in where a team stands at season's end. At 2-1, Miami's .667 leads the division right now. They just need to project the minimum number of games they've gotta play -- Covid-19 will figure into that calculation, too -- and ... well ... stay positive.

But, that's the Marlins.

It's a different story when a team that actually intends to contend gets up close and personal with the virus.

That it's a traditional club in a city where baseball is a passion and has a boffo broadcast contract boggles the mind.

So, to the chagrin of other clubs vying for a slot in this year's expanded playoff format, maybe the Cardinals' considerable pitching depth won't be stretched all that much.

In the immortal words of disgraced President Richard M Nixon:

That includes scratches, too. In any sport.

The Cardinals involved have invoked their right to privacy, so if they're still positive when St Louis plays their next game, no one's likely to know until they're placed on the IL.

The question, though, is when will that next game be?

If the Marlins -- not to mention the world at large -- have proven anything, it's that once that virus invades a group, the contamination's gonna spread. It's damn near a sure thing that more Cardinals are gonna get hit with it.

This is just the way Miami's outbreak began. At least the Cardinals didn't decide to go against science in a group chat.

Anyone who thinks this'll end quickly is dreaming. The only questions now are how many players and how many games?

Not to mention the ultimate puzzler: How did this happen in the first place?

It's probably down to more than high-fiving, no masks when not in the field, spitting, and all the other anti-contamination rules in that 133-page protocol manual, but once the virus has invaded, ignoring those niceties probably didn't help put other players in the line of fire.

Again, two of the globe's biggest soccer leagues proved a traveling bubble can be successful, but it'll only be that way if everyone involved takes it seriously.

As if it hadn't already, the time has come for everyone in MLB to wanna take a harder look at that manual and decide how much playing this season actually means to them.