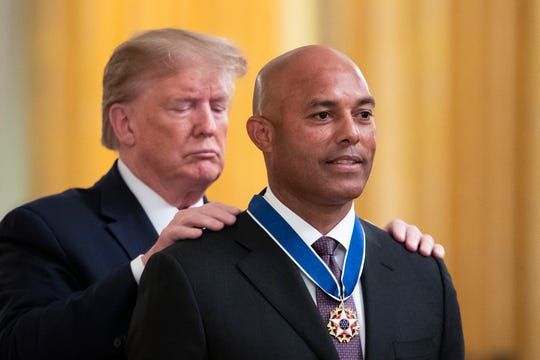 If you're anything like us, you've probably been wondering why Mariano Rivera had yet to receive the Presidential Medal of Freedom.

Well, fear not, because this insulting oversight has finally been remedied.

The former Yankees closer was at the White House recently to accept our nation's highest civilian honor.

Oh yeah, and the leader of the free world was there as well.

In addition to his dazzling social media skills, the current POTUS is also a savant-like expert on baseball history.

“After five years playing in the minors, in 1955, Mariano finally made it to the big leagues.” —⁦@realDonaldTrump⁩ on Mariano Rivera’s debut with the Yankees. pic.twitter.com/WNHBOALl3F

Playing in seven decades is quite an accomplishment.

Our beta test of a Commander-in-Chief also displayed an intimate knowledge of 1980's metal, or 1950's if you're cognitively impaired:

Well, that's the most depressing thing we've seen all day.

But back to baseball.

At one point, the Trumpster even did a deep dive on Ryan Klesko, because you can't talk about Mariano Rivera without mentioning the beefy former slugger.

Perhaps its time we let Mariano get in a word or two.

New York Yankees legend Mariano Rivera speaks ahead of receiving the Presidential Medal of Freedom: "I'm proud to be an American. So, for that, thank God." https://t.co/JsAo4rT8TM pic.twitter.com/gHfC5SVvjA

It's pretty clear why Rivera would be so friendly with the Orange Goblin.

We simply don't have the words anymore.