Clemson Stops by the White House for a Fast Food Buffet 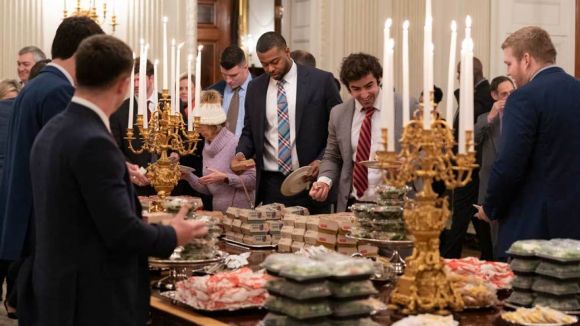 Once upon a time, it was considered a privilege for championship teams to visit the White House.

Clearly, this isn't currently the case.

The Clemson Tigers tore Nick Saban a new one in the title game, spanking the Crimson Tide, 44-16, to take the CFP Championship.

As a result of this historic triumph, they were rewarded with a trip to TrumpLand.

Please remember to keep your hands and racism inside the car at all times.

Now, because of that pesky government shutdown, the White House chefs have been furloughed, which makes catering events something of a problem.

News: Due to the government shutdown, President Trump is personally paying for the meals that will be provided to the Clemson team during their celebration tonight, CNN has learned. Trump said he's serving "McDonald's, Wendy's and Burger King's with some pizza." WH statement: pic.twitter.com/SAae2dSuMr

See, this is the kinda pro-active thinking that makes us the envy of the planet.

And just look at this spread:

We couldn't be prouder.

Clemson team steps up to chow down at WH fast food buffet. pic.twitter.com/HgIsKqVHDy

Somewhere, Morgan Spurlock just threw up in his mouth a little.

The Clemson team nutritionists are probably displeased, as well.

As with most White House episodes these days, this shit reads like satire, but it's really happening.