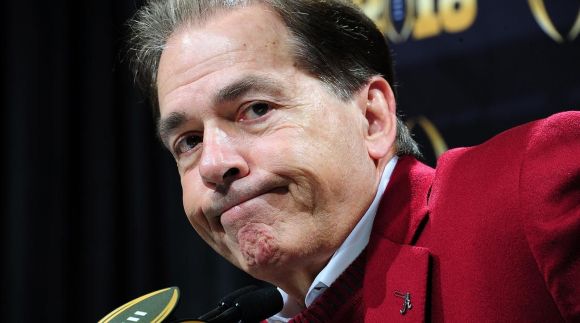 You may recall way back in January that those plucky Central Florida Golden Knights decided to celebrate a national championship.

Of course, this was all the product of their collective imaginations, but that didn't stop the program from creating championship rings and erecting a championship sign in their stadium.

They even had a Disney parade.

No, it's true, they actually did all these things.

That is a handsome ring.

Of course, these scrappy underdogs did go undefeated and are hopelessly locked out of an inherently flawed system designed to deny these types of programs the opportunity to compete for an actual national championship.

Alabama head coach and power broker Nick Saban really doesn't enjoy discussing such things, but was asked about it yet again at the recent SEC Media Days.

He seemed to try for diplomacy, complimented the Golden Knights on their undefeated season while acknowledging how difficult it is to acheive perfection.

However, there was a note of condescension as he discussed the current playoff system and how they probablly did get it right after all.

Obviously, Nick has little incentive to want to alter the current system in any way.

Some Bama players even did a little trolling after receiving their jewelry in April.