Published on 5-Jul-2019 by Alan Adamsson 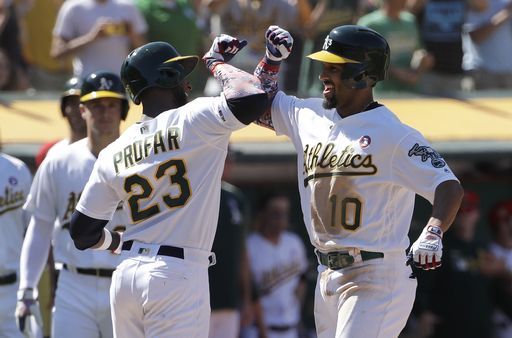 Baseball is nothing if not a wealth of traditions.

The Athletics franchise spans stays in three cities, and it's picked up a few along the way, three of which are:

Then there's the Seattle Mariners, formed to settle a lawsuit after Bud Selig bought the bankrupt Seattle Pilots and whisked them off to Milwaukee. So Ball Four has nothing to do with them.

Now, under the assumption that the same thing happening eight years in a row is approaching tradition status, each of these teams has another one.

For the 8th straight season, the A's won on the Fourth of July, the longest such streak in franchise history.

And for the 8th straight season, the Mariners lost on the Fourth of July, the longest such streak in franchise history.

One was a grand slam that removed all doubt in the Athletics' 7-2 victory over Minnesota:

Up in the Pacific Northwest, if any team needed to be playing the Mariners on the Fourth of July, it was the St Louis Cardinals.

After a hot start that began in Japan, the rest of Seattle's schedule reminded them who they really were.

St Louis had broken from the gate quickly, too, going 20-10 before turning May into the dog days and basically breaking even in June.

The Mariners went with an opener like their did in their Game 1 win, and the Cardinals went to the plate being less picky, which manager Mike Shildt told them it was time to do.

A bitta free swinging and a stingy bullpen led the Redbirds to a 5-4 victory:

It's early days for Tommy Edman, but if he gets through the Bo Hart zone and keeps it going, the Cardinals could have some interesting lineup decisions to make.

As to the Mariners, they're all about decisions. It's what GM Jerry DiPoto does.

Maybe some day, he'll find the right combination to win a game on Independence Day. But, to the delight of a horde of Cardinals fans whose numbers and vocality overwhelmed the locals, it wasn't this day.