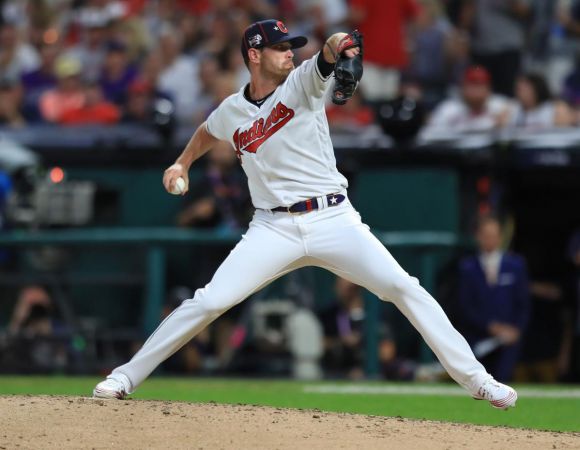 While the discussion continues as to whether or not this season's baseball is juiced or what, one age-old definition still holds true:

A batter isn't a hitter until he hits the ball.

Just like in recent years, there have been a hella lotta batters in MLB games in 2019.

PED testing aside, juice that.

Thus, in MLB's All-Star game -- where most batters only see the other league's best hurlers on rare occasions -- why wouldn't pitchers ring up an impressive number of punchies?

What's more, because they're the game's elite, it's no surprise they'd be doing it with more than blazing heat.

That was one of a startling 16 strikeouts the AL staff rang up. In contrast, though, the NL pitchers totaled a mere 7 over eight innings, ie- a normal number.

Both staffs kept the long ball at bay, though. Only two hitters went bridge:

In true exhibition style -- no World Series home-team advantage is on the line anymore -- other fun stuff happened.

There was also poignant stuff.

Like Cleveland's Carlos Carrasco -- being treated for myeloid leukemia -- getting a roar of affirmation when he was introduced during the Stand Up to Cancer break.

The ultimate result was a 4-3 American League victory, as in what else is new?

That's their ninth outta the last eleven, with a tie tossed into that mix.

The NL fielded the youngest roster in All-Star Game history, averaging just under 26. Maybe it showed.

How quickly can the game change?

Cleveland, of course, is the official home of rock-&-roll by nature of DJ Alan Freed popularizing the term.

They've built an awesome museum for it and incorporated this heritage into the 2019 All-Star Game logo:

The fans there rocked the Home Run Derby and rolled that enthusiasm into and around the game itself.

They were there when baseball had its origins. They've been immortalized in fiction as well as fact. They've seen the game's trends come and go, which helped to make Cleveland the ideal setting for this year's Midsummer Classic.

They celebrated every minute of it, which is the best anyone can expect fom an All-Star weekend.