Accelerate Does Just That to Claim the $6million Breeders' Cup 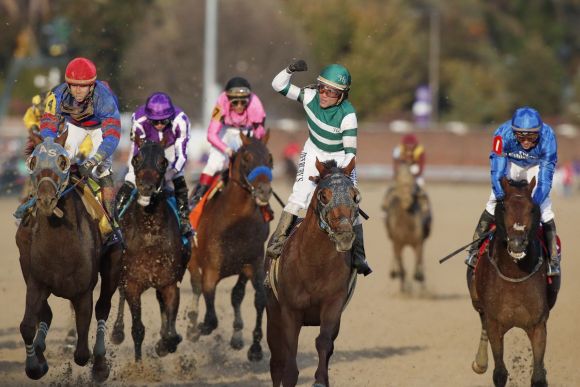 It's gotta feel good to snap a 30-year losing streak.

Count trainer John Sadler among those who've experienced it.

Dude picked up his first trip to the winner's circle in 45 tries when 5-year-old Accelerate added to a spectacular racing résumé by taking the Breeders' Cup Classic.

The chestnut colt came into Churchill Downs after posting three straight Grade 1 victories and stepped into the gate -- after a little coaxing -- as a 5:2 favorite.

It was well and truly justified, as he was true to his name. Check out that final quarter-mile:

Jockey Joel Rosario was doing everything short of pulling out a Knute Rockne speech down the stretch.

The 1¼-mile race proved too much for the illustrious Bob Baffert's entries. The trainer of Triple Crown winners Justify and American Pharoah saw his horses fade badly near the end. West Coast fell to seventh and McKinzie was 12th.

The next match-up for the two trainers may be on 24 Jan 19 when Horse of the Year honors are announced. It's surely a race between Justify and Accelerate.

Here's how the day's slate fared: