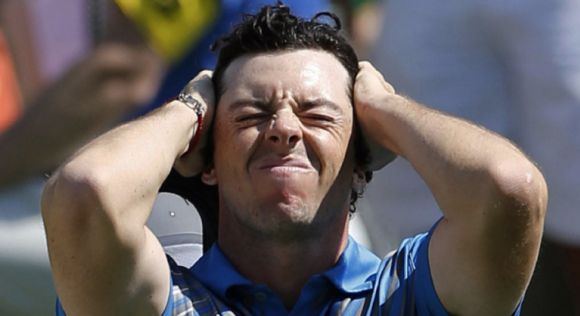 Even in the midst of a global pandemic, there does emerge the occasional flicker of light.

For example, with the PGA Tour firing up play again at fanless venues, we've been treated to some delightfully vulgar reactions from some of the game's best and brightest.

The recent RBC Heritage at Harbour Town was won by the incomparable Webb Simpson.

However, we were completely distracted by the adult language.

Well, the lovely and talented Rory McIlroy was teeing off during the second round when the following occurred:

Rory, we know your pain! 😅pic.twitter.com/OTscSvcs4v

Indeed, if the top-ranked golfer in the whole wide world is doing such things, then what possible chance do us mere mortals have to maintain our composure?

Fortunately, Sir Nick Faldo was on the scene to properly express our shock and disappointment while simultaneously explaining the more technical aspects of the game, obscure jargon included:

But wait, here's a fun exchange between Adam Hadwin and a rules official during the first round of the very same tournament:

Here's Adam Hadwin vs the rules of golf... pic.twitter.com/0rDCnK7vrA

Hadwin lost this round, but not before gracing the dude with a hearty screw you.

Well, he did thank him.

We're fairly certain Ricky was talking about the Yalta Conference.