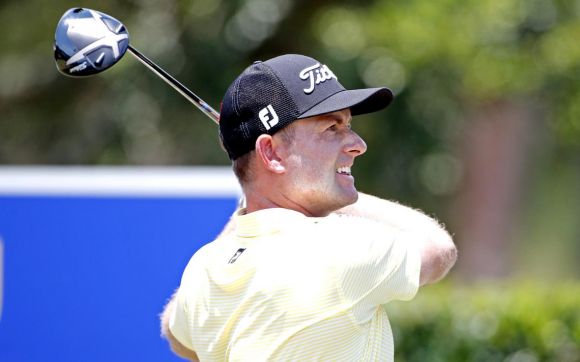 If the PGA Tour was looking to give its players a soft landing in order to get up to speed after the resumption, they succeeded.

Covid-19 may be a bitch, but the first two tournament courses weren't.

The Colonial Country Club in Ft Worth didn't put up much of a fight last week at the Charles Schwab Challenge, and this week's course setup at the vaunted Harbor Town Golf Links was at least as forgiving.

Still, it's not like an entertaining finish wasn't there to be had.

After waiting out a three-hour storm delay -- which beat the hell outta the three-month delay the Tour just endured -- Webb Simpson closed with five birds in a six-hole stretch on the back nine to pocket a cool $1.278million and collect 500 FedEx points that came with donning that tartan blazer the RBC Heritage forces its winners to wear.

What is it Edwin Starr used to exclaim?

At least Simpson's traditional final-round yellow shirt -- that was his dad's favorite color -- matched it as best as anything could.

Still, old-boy glam aside, dude had quite the day.

This was supposed to be the US Open weekend, a Father's Day staple in years gone by. The RBC Heritage jumped into the void, and soft greens made target golf a sharpshooter's paradise.

Dude hit all 18 greens in regulation and tied for the lead with a ballsy fairway metal over the trees to the Par-5 15th that set up a two-putt birdie. He added a birdie on the 17th and finished with a 65. Great round. Solid tourney.

But there was no stopping Simpson.

Maybe Brooks Koepka took notice that a fortified Bryson DeChambeau was mounting a challenge to replace him as the ersatz Alpha Bomber.

Distance is one thing, but adding accuracy to it is quite another, kinda like Koepka displayed on the 329-yard Par-4 ninth hole:

Before play was suspended, @BKoepka was playing par 4s like par 3s.

Suffice to say, dude eagled it, his second on the front nine after a two-putter on the Par-5 fifth.

Koepka liked this one so much, he re-tweeted it and is on the way to winning the internet. It'll likely have a million hits before all is said and done.

Now, all he has to do is hammer a few more of them. Dude's sitting at No 204 in the FedEx Cup listings and need to be in the Top 125 to make the playoffs. He's got every shot of doing so, too, as he just showed on the ninth.