The Masters Is a Scramble at the Turn; 13 Contenders within 3 Pops 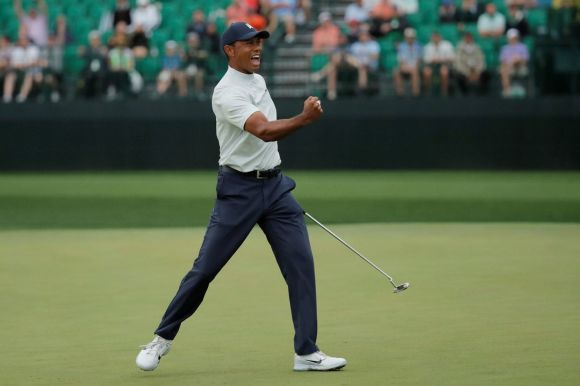 Before the first of this year's major tournaments teed it up, Golf World ran one of those clickbait previews that accompany most big events.

Interestingly enough, they've nailed one fact before it happened.

Dudes gave 13 golfers a shot at donning the green jacket this season, and at the turn, 13 golfers are right in the mix to do it.

OK, they're not the same golfers, but that's picking nits, which sounds disgusting.

What still counts for media types is that one of them's the Tiger.

So there. That oughta make Bovada happy.

There's been a great deal of enjoyment to partake, too.

Here's how the first two round unfolded:

Attempting to party in a major for the first time in Dustin Johnson, holder of 20 tour titles but still seeking his first major. His second-round 70 has him six-under at the turn, only a shot behind the current quintet of leaders:

For those wondering why Zach Johnson isn't up there, here's one reason:

Zach Johnson just laid up off the tee pic.twitter.com/rvjsf7UlMm

And no, the rules state there's no penalty in that situation:

A player has started a hole when he or she makes a stroke to begin the hole.

Since a stroke is defined as the forward movement of the club made to strike the ball, a practice swing shows no intent of doing so. Thus, the Zachster suffered only a bitta embarrassment.

Everyone else seems to be.