Molinari Caps the Arnie with 44-Foot Birdie on Final Hole 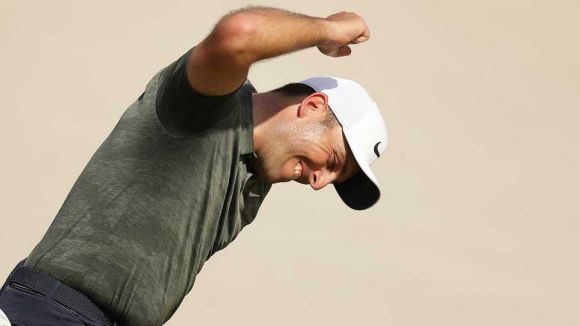 History was made on the 18th hole at Bay Hill in Orlando as this year's Arnold Palmer Invitational came to a close.

In the scheme of things, it had little to do with British Open titlist Francesco Molinari ringing up another tournament title.

In one of those achievements that only a golfer or an accountant could love, dude holed a putt with the flag in:

Let our beating hearts be still.

The little Italian didn't even have to bank his ball off the pin, which woulda really drawn gasps from those learned fans who know to gasp at such things.

It was understood by all, though, that Molinari had just put the pins in a closeout score of 64, spectacularly charging from five shots down to beat the field by two strokes:

It's interesting that Molinari only kept the pin in on his long-range traveller.

Maybe it's a visual distraction from nearer distances.

Then again, perhaps experiments like this influenced dude's decisions:

No matter where the flag is, Bay Hill's final hole is no stranger to high drama.

Just last year, Rory McIlroy hammered home a long one to complete a sensational round of 64 to win the tourney:

Back in 2008, the dude Fluff Cowan calls Tigger did what was damn near a weekly feat for him:

That sorta magic seems like its from a forgotten era these days.

But today belongs to Molinari, swinging hot sticks and idolized throughout Europe's golfing community for his performance in last year's Ryder Cup.

And now he commands a niche of golfing lore. Great comeback. Helluva putt.