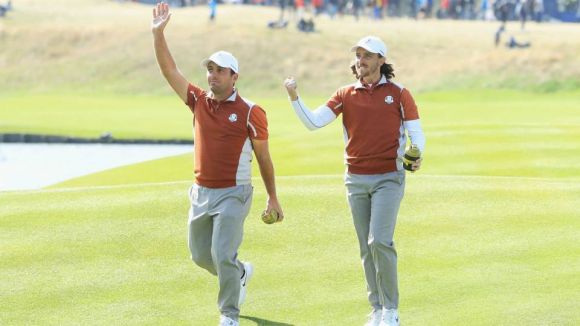 Team Europe coach Thomas Bjørn knew a good thing when he saw it.

And what he saw was a huge dose of broheim alchemy being conjured with every stroke Ryder Cup rookies Francesco Molinari and Tommy Fleetwood took.

Which were -- as golf tends to reward -- fewer than their Ryder Cup opponents took.

With foursomes and fourballs now in the books, the EuroDuo had made the right sorta history.

The pairing now known as Moliwood has become the first to go 4-0-0 in pair play since the current Ryder Cup format began in 1979.

After totally dominating their rounds on Day 1, they did it again today to help expand Team Europe's lead over Team USA to four points.

In the morning fourballs, they reduced Captain America -- aka Patrick Reed -- to the Invisible Man. Wilting under the pressure of trying to match them, dude spent more time in the rough than Daniel Boone.

Team USA coach Jim Furyk had no choice but to sit him in the afternoon.

And Tiger Woods? He of the 0-3 Ryder Cup record against Moliwood?

Hell, if it weren't for the longstanding bromance between Jordan Spieth and Justin Thomas putting their fingers in the dike today, Team USA coulda fallen behind, 12-4, instead of clinging to hope at 10-6 down.

Toss in the other pairings' results, and Team Europe had a one-point net gain on the day.

Overall, it was arena golf as usual, including another dynamic shot from Tony Finau to give Team USA false hope of gaining ground:

Storylines are already abundant, but history has shown that Day 3's dozen singles matches can be a veritable plethora of redemption.

Think of it as a shipload of whatever.

As with the fourball and foursome matches, Ryder Cup procedure is for the captains to submit their list of players in the order by which they'll tee off.

With 28 points on the line, Team Europe only needs 4½ more to hoist the hardware. The mind games of who should be slotted where, and here are the matches:

It's clear Bjørn expects to hoist the hardware no later than Molinari's match with Phil Mickelson who, at this point, could use a genie for his caddy.

As for Furyk's lineup, what can one say but hope springs eternal. History is there to be made.