Raducanu Slays It in All-Teen US Open Women's Final 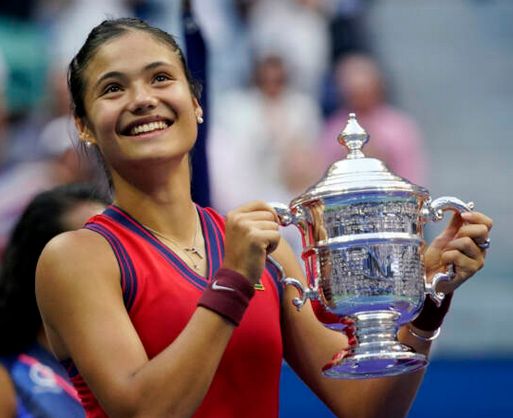 This is fast-tracking like it's never been done before.

Sure, there have been teen sensations in women's tennis, and it's an extreme rarity when they've met in a final.

More impressively, there has never been a qualifier in any Grand Slam who's blown through the opposition all the way to earning the championship.

The only question was which qualifier would claim that distinction.

In fact, besides their nationalities, these two packed a full international flavor into this year's final:

Their paths never crossed, though, until they formally met at the Wimbledon junior singles Round of 16 back in 2018.

The British teen's serve has definitely grown since then. So has her depth of court. As to Fernandez, she's honed her baseline game, which further complements her quickness.

Raducanu returned to SW19 this summer and made a more visible impression. However, the experience ultimately caught up with her, which in hindsight, probably better prepared her for the run that got her to the US Open final.

Dudette was so prepared, in fact, she never lost a set at any time during the fortnight, starting with surviving three qualifying sets just to get into the main bracket. By the time she hoisted the hardware, that became a string of 20 straight.

Raducanu was thus well in tune with her game by the time she disposed of Fernandez, 6-4, 6-3:

Raducanu is now the first British woman to claim a major since Virginia Wade won at Wimbledon in 1977 and the youngest since Maria Sharapova at Wimbledon in 2004. She's also the first of her citizenry to bring home a Slam title since Andy Murray in 2016.

Her father was also her coach. However, while a lot of young girls who show a proficiency zero in on tennis first, last, and foremost ...

Her dad wisely introduced her to a range of sports -- from equestrian to basketball -- and other disciplines such as ballet. It's surely why Emma acquired a set of well-rounded athletic skills that no doubt helped her training and her mental strength. She's all business between the lines.

Fernandez, in contrast, seemed to play better when she played to the crowd.

Dudette's a bundle of boundless energy, anyway, and when she felt she needed an octane burst, she had no problem going into cheerleader mode.

Fernandez's dad, Jorge, also served as her coach even though -- like the Williams sisters' father -- he'd never played the game. Safe to say, dude's a quick learner who apparently still knows his limits.

His daughter came up on the short end in this final, but a look at the stats shows how close she came:

Essentially, serves were the difference, as exemplified by the match point winner that Raducanu screamed beyond Fernandez's reach at 108mph.

With many of women's tennis headliners such as the Williams sisters sitting this year out and top seed Ashleigh Barty falling earlier than expected, it appeared for a short moment that this singles bracket would be devoid of stars in its more dramatic stages.

Leave it to a couple of feisty teens, though, to put that notion to rest.