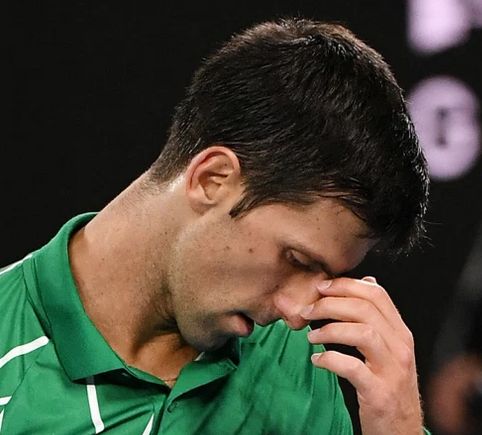 First of all, it should be noted that the ATP top-seeded player is not a card-carrying anti-vaxxer.

That's a bogus movement that was totally debunked years ago. There's zero correlation between vaccinations and autusm.

Novak Djokovic just doesn't happen to like being vaccinated.

Kind of a stunning philosophy for someone who's so well-traveled and accomplished, but there it is.

Now, as the saying kinda goes, history may not repeat itself, but it does have a way of rhyming.

That's what medical experts -- not just famous doctors with accents, but certified dudes and dudettes who know what the hell they're doing because that's their life's work -- are trying to avoid this time around as Covid-19 is doing a number when it gets a toehold in an area.

And it loves crowds.

As it stands right now, fans have gotten that message loud and clear.

Before sporting events are gonna be able to return in earnest, then, effective vaccines -- and treatments -- will need to be available.

And used, says the ATP, among other organizations.

Which is where Djokovic is gonna have to make a decision. The Serb doesn't have Never Vax tattooed on his person anywhere, so it actually will be an open-minded choice, according to him.

Dude, there are better ways to make up your mind than trying to pound the snot out of it:

Djokovic isn't prepared to stand on principle just yet. Seems like there's a place for practicality, too.

When Djokovic needed elbow surgery to save his career, he went under the knife even though he didn't believe in operations.

Now, he may need a jab to extend his career. Gotta like the chances of it happening, but probably not until it's absolutely necessary.

It'll be a while. Most of those in the know say it'll be 12-18 months away unless some sorta breakthough occurs, and it could. Science is good like that.