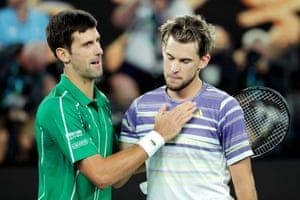 Maybe this comeback didn't contain the amazement factor of Roger Federer's great escapes in this year's Australian Open, but Novak Djokovic had to do some serious soul-searching to recover his momentum.

That's the power of clutch shot-making and two timeouts to visit a doctor.

Maybe the doc found a last-minute cure for what golfers could easily call Bryson DeChambeau syndrome.

The second set turned at 4-4 with on Djokovic getting -- and deserving -- two time violations that resulted in the break that gave it to Thiem.

Touchy, and literally so. Dude tapped the umpire's toe on the way over to his seat. Not recommended for any except the biggest of the big, apparently.

Meanwhile, whatever his malady was, the Serb was going all-out visible in trying to combat it during the third set:

That did the trick.

Djokovic returned to the sorta form expected from a 2-seed and rope-a-doped his way through the fourth set. Thiem's got a heavy shot, and the Serb seemed to know when to chase and when to conserve energy.

He counted on long volleys to turn the tide, looking for a strategic break against the 5th-seeded Thiem and picking the right moments to find them.

As well as being Djokovic's 8th Aussie title, it's his 17th Slam championship, which is three behind the men's record of 20, held by Federer.

If he's now found a cure to what ails him and makes nice with the time clock from now on, it's quite possible he'll be closing that gap in the near future.