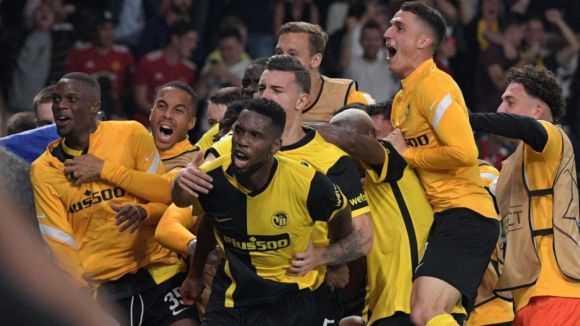 Who says the Swiss don't have a sense of humor?

Besides almost everyone in Europe.

The club was founded back in 1898 as a send up to the city's upper-crust Old Boys Club, which has long since ceded any vestige of football prestige and is now better known for its tennis offshoot tennis being the home club of Roger Federer.

The snickers don't stop there as far as the English are concerned.

Turns out that the Young Boys have renamed their ground back to its original Wankdorf Stadium.

But tonight's one of those times when the joke's on the English.

The club's been known to spash out €3m for a player every now and then, so the specter of them knocking Manchester United and their recent reacquisition of Cristiano Ronaldo -- for more dosh than Young Boys have probably spent on signing in their entire history -- brings a smile to limited-budget sides everywhere.

Their 2-1 Champions League Group F victory over the Red Devils may have come with a caveat, but it's three points nonetheless.

United defender Aaron Wan-Bissaka hasn't been known for making the wisest choices lately, and his totally needless challenge a half-hour into this match was one of those.

The resultant red card not only left the Devils short-handed, it caused manager Ole Gunnar Solskjær to inexplicably send his squad into a shell, ceding virtually all attack time to the hosts. In fact, United only got off two shots over the entire night, and a strategy like that rendered inert the floating, defense-optional Ronaldo.

And yet, dudes almost got away with stealing a point courtesy of the Portuguese international's 13th-minute goal if it weren't for Jesse Lingard serving up a better sitter for USA National Team striker Jordan Pefok -- aka Theoson Jordan Siebatcheu; he decided to now go by his mother's maiden name -- who drilled the shocking winner on the stroke of time to secure the result.

Atalanta and Villareal are the other contestants in Group F, so United must still like their chances of advancing to the bracket stage. However, this was surely the match they circled for road points.

The Red Devils' kajillions can buy a mighty fine side, but it's not a given that common sense comes with the purchase.

Young Boys were no doubt still laughing about that in the aftermath.