VAR Unkind to Watford as Tottenham Salvages a Home Draw 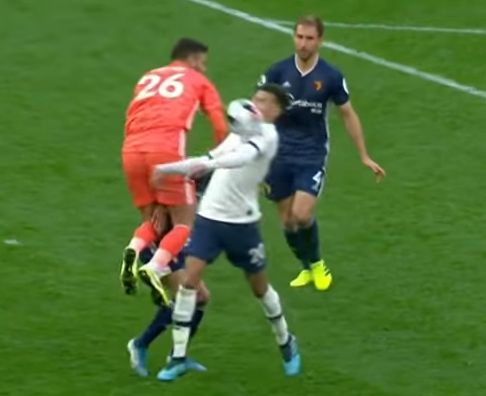 When you're down and almost out, catching a break can be a bitch.

The Watford Hornets are propping up the Premiership with all of four lousy points in nine matches, all of which are draws, and the latest of which just came in a 1-1 effort against Tottenham Hotspur in their plush new digs.

To hear Hornets manager Quique Sánchez Flores tell it, though, securing a point in a big brand's house wasn't enough.

Consider him another convert to the obviosity that no matter how much technology you throw at at close call, there's still gonna be a human there to interpret the data.

In his view, which has considerable support, humanity was not kind to Watford this afternoon:

Life at the bottom isn't easy.

It didn't look that way at the outset, though. Spurs may have opened with five in the back -- as did Watford, which is to be expected -- but they could play ten in the back and they'd still find a way to concede goals.

Even though Danny Welbeck came up lame immediately after kickoff, Watford was undeterred. In the sixth minute, Watford's Daryl Janmaat swept a pass to Abdoulaye Doucouré who finished in stride, and a lovely day to be a Hornet seemed to be dawning:

Why a defender at this level would be backpedaling on a ball like that defies comprehension, but Danny Rose lost vital steps in the process, and the die was cast.

The stats say Watford only controlled possession 31% of the time, but they had other moments. Besides the Deulofeu penalty that wasn't, Janmaat fluffed a couple of chances he shoulda buried. These would come back to haunt the squad.

It looked like the Hornets might whistle past the graveyard and collect all three points, but that's when Ali did his thing and got away with it:

Spurs, meanwhile, kept even with the likes of Burnley, Bournemouth, and West Ham.

All things considered, that's an indictment if ever there was one.