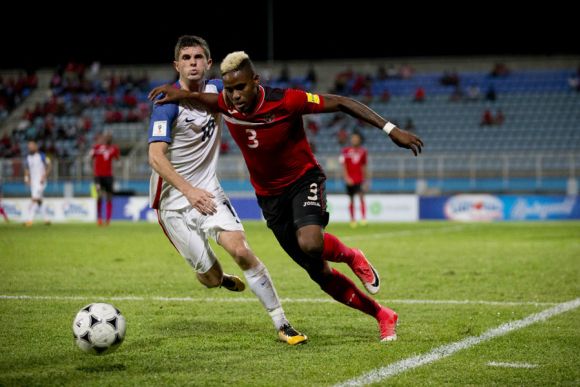 More often than what's fair, it's better to be big than good.

And these days, until proven otherwise, the USA Men's National Team is fine with that. Dudes still need every edge they can get.

Exhibit No 1: All the Americans needed to do was squish those minnows from Trinidad & Tobago back in 2017 and they'd play in the 2018 World Cup hosted by Mother Russia, which had its perks.

Incredibly, there they were, that close.

Word is it took England ages to live down their 1-0 loss to the USA in the 1950 World Cup. The Americans' shock 2-1 upset at the hands of that pesky T&T crew shouldn't take as long, being as how they easily handled the Soca Warriors in the subsequent Gold Cup.

The point is, what direction was the USA taking after that episode?

Hiring Gregg Burhalter -- who fittingly has a stint with the Columbus Crew on his résumé -- told the tale there.

In tune with that bizarre America First attitude, it was simply politically expedient to just grab a pail. So it'll suit the Americans just fine to say see ya to Concacaf's Hex format and damn glad to meet you to their new Octagonal system for World Cup qualification, where the region's Top 5 get a bye all the way to the third round: If there are downsides for the USA in this set up, it's these:

But still. The Top 3 of that crowd should be a given. Even for a buncha grinders.

Especially when they're accompanying the likes of Christian Pulisic, Tyler Adams, DeAndre Yedlin, and just possibly one of their up-&-comers like FC Bayern's Chris Richards:

With his debut, Chris Richards becomes just the 4th American to feature for Bayern Munich in their 120 year history. He joins Julian Green, Landon Donovan, and Wolfgang Suhnholz.

He is the only American defender to ever feature for the German giants. pic.twitter.com/jFIDvXstUx

The fun and games were due to begin this September, but Covid-19 put paid to that. The tournament will now begin next year -- June 2021 through March 2022 -- if the entire world isn't in ICUs by then.

Like other sports on their own timeline's, Concacaf's schedule is getting kinda packed:

The USA's already qualified for that one, as they should. Being one of the region's two money-spinners, they're understandably being every break Concacaf can find.

At some point, though, the Americans need to step up and earn something for themselves, every damn time they take the pitch. Concacaf's done its job. Time for the USA to do theirs.