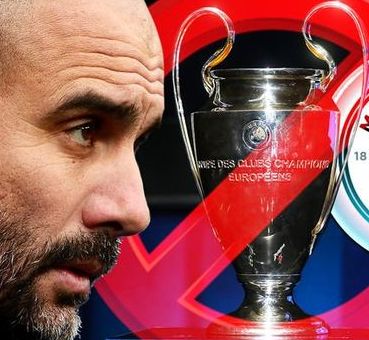 So much for the dark snark of if you're not cheating, you're not trying.

The difference, though, is that the 'Stros' are seemingly getting away with having their pee-pee whacked, while City's been tossed from the ATM machine that is UEFA's Champions League.

Simply put, the purpose of UEFA's financial fair play rules is to prevent mega-wealthy football club owners from pouring wads of dosh into their payrolls to scarf up the best talent out there, as if most of the big brands don't do that already.

City's owned by a bottomless pit of money known as the Abu Dhabi United Group. The Sheikh who owns it is a member of that Emirate's ruling family, meaning they actually do have infinite dosh.

This also means they're accustomed to doing whatever the hell they feel like doing, because who's gonna stop them?

It probably seemed like a simple matter for this particular Sheikh to claim sponsors had ponied up £67.5million (approximately $88million) for naming rights on City's kit when in reality the cash was mostly his.

Somehow, Germany's Der Spiegel magazine got hold of a few emails and documents from 2018 that exposed this dastardly plan like an open overcoat.

In that rarefied 1%er air where money is an abstract given, even the $200million in lost revenue would be a drop in the Arabian Gulf if not for the fact that this ban -- if upheld by whichever court gets the last say -- will be the gift that keeps on giving.

If a club can't spend more than it earns -- a not-so-novel thought to most people -- then City's gonna be restricted in the signing ability for more than the life of the ban.

In other words, it won't just be Pep Guardiola who could be heading for the door. Dude might say differently to keep up morale, but these will be interesting times for him.

Most of City's key players are under contract until 2023, but one of the main reasons they became Citizens is to compete for the big trophies. If the likes of Raheem Sterling, Sergio Agüero, and Kevin de Bruyne want to leave, the club would be hard pressed to stop them.

City clearly won't need any added motivation when they meet Real Madrid in Champions League action late this month, but the thought that this may well be their last bite of the cherry in this competition for a while will surely be front and center on their minds.

Meanwhile, the action that matters is gonna happen in a European court somewhere.