The Galaxy Gets Its First Two Ibro Moments 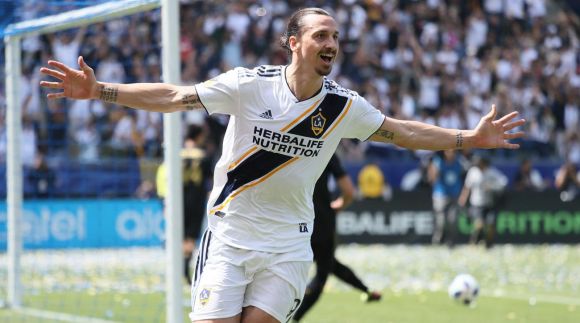 Some dudes just know how to make an entrance.

Even in the twilight of their careers.

Others are adept at living in the moment.

Then there's Zlatan Ibahimović, who's uncannily awesome at both.

And he picked a city that knows how to appreciate such things.

The Los Angeles Galaxy has needed a jolt from somewhere -- anywhere -- lately, and in that city, even something shallow will do as long as there's hype to go with it.

Well, hype-wise, they got their wish. That's the newspaper ad on the right that he placed to announce his arrival: As if that wasn't enough, the Swedish striker left no stone unturned:

Not only seeing the writing on the wall -- and in print -- at Manchester United, Ibro figured to make more of his time. So he selected the MLS, where he could also make an impact and bask in the glamor of doing it.

And he wasted no time going about it.

The expansion Los Angeles Football Club was on the Galaxy docket, and with 20 minutes left in the match, the newcomers were having their way, leading 3-0. So the chant went up.

The crowd wanted something outta the proceedings, and Zlatan was their man. So, on he came, and did Zlatan things:

Again, you're in the right city, dude.

Now, get yourself totally fit and answer those calls from Stockholm.

No matter what's being printed recently, they could use you in the World Cup.