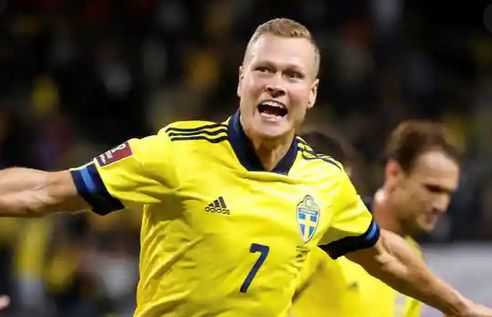 It was never gonna be the English, French, or Germans.

They're the big draws for the main event, and it's unthinkable for one of them to be in the second bowl of seeded sides.

So if anyone was ever destined to halt Spain's 66-match undefeated run in World Cup qualifiers, it'd probably have to be due to a triple witching hour of skill, timing, and luck.

Long, long ago, this combination sorta worked for that crew from up North ...

And for at least one fleeting moment in a football way, it's worked for them again.

These days, Sweden doesn't have a dynamic Zlatan to finish, but their more customary low-key team approach to a match usually is enough for stronger opposition to pay attention. Still, breaking through against one of Europe's power sides has for the most part been elusive.

But not this time.

If any Euro-Power was gonna be vulnerable to them, it'd be Spain.

In between, Blågult 'keeper Robin Olson was constantly occupied with parrying a fusillade of Spanish thrusts.

Beyond a boost in Sweden's confidence, the most significant effect of this victory was giving them a shot at first-bowl seeding in the World Cup Final draw.

The balance of Group B is mostly point fodder for Spain and the Blågult:

The match was played in Stockholm, the nation's capital that's situated in the south.

Odds are, then, the supporters there didn't celebrate by tucking into the traditional northern snack of surströmming -- aka fermented Baltic herring -- that one only has to get near to understand the experience.

For the Spanish contingent, though, what happened to them in this match was experience enough.