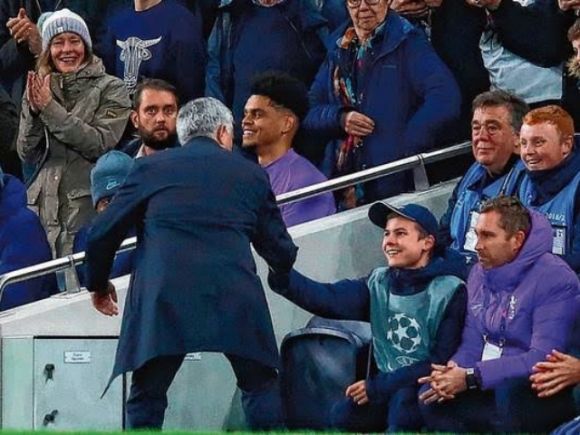 College gridiron fans at Texas A&M have a decades-old tradition of celebrating the 12th man doing what they can to coax their team to victory.

Now, maybe Tottenham Hotspur has one, too.

An alert ballboy enabled a quick throw-in that resulted in a key goal ...

... as Spurs fought back from a two-goal deficit to leave Olympiakos in their wake with at 4-2 victory that advanced them into the Champions League knockout phase.

Needless to say, José Mourinho was beyond pleased with the little dude.

This was a momentous occasion for the Special One, being his first home match and all.

Spurs fans were still in awkward mode, trying to make the adjustment to not hating him. Even more pressing, Mourinho was hired specifically to win trophies, and this match would keep Tottenham on track for a shot at some seriously prestigious hardware.

Maybe he and his crew were too psyched up for the evening. Dudes opened the festivities by committing two of the sins that got Mauricio Pochettino fired:

After only 19 minutes, Olympiakos had a two-goal lead while Spurs were tinkering so much on the attack that even the fans were voicing their displeasure. It was enough for Mourinho to take drastic measures.

On only the half-hour, dude switched out the defensive midfielder Eric Dier for Christian Eriksen to add a bit more punch.

Suffice to say the move paid off. Spurs became gradually more dangerous, clawing a goal back when Dele Alli capitalized on a swing-&-miss clearance and equalizing on Harry Kane's blast on a buildup that began with the ballboy.

After that, Tottenham was leaving vapor trails:

This marked Mourinho's 80th win in the Champions League, which he quickly brought up after the match. Not to mention the quip that he was an intelligent ballboy in his munchkin days.

Dude may have put on a sheep's clothing of humbleness, but there's no doubt about it. He's still the wolf he always was.