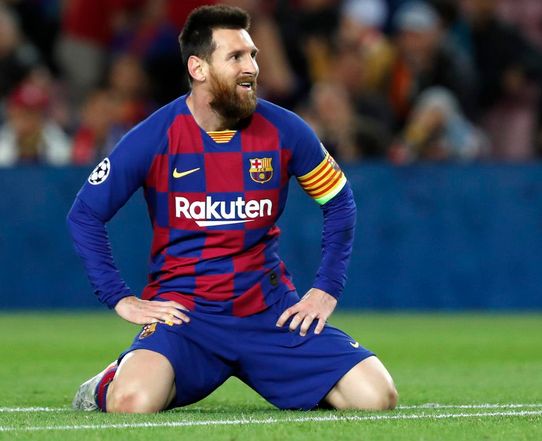 In this, the Year from Hell, FC Barcelona's kept true to the trend by enduring their own year from hell.

Apparently, Lionel Messi felt every searing ember of it.

Now, dude's declared that he's had enough of it to the point that he's demanded a change of scenery. As in anywhere but Catalonia.

Stunning as that announcement might be, it'll be even more so if a move actually happens.

Barça's the only club dude's ever known, so it's clear he's fed up to the max with what he's seen and, most noticeably, not seen, especially a retooled roster to keep up with the times.

The tipping point, no doubt, was that abject beatdown at the hands of FC Bayern in the Champions League quarter-finals that sealed Barça's first season without a title since 2007-20008. Messi wore a blank stare after the final whistle that all but mimed get me outta here.

And also not practical at all.

Messi's current contract was agreed when Barça was in cruise control at the top of La Liga as well as the rest of Europe. Dude's first deal was signed on a napkin when he was 13, and this one keeps him tied to the team until 2021.

The mutual benefit has been beyond doubt:

However, there's just one detail about that current contract.

Barça dropped in a €700million buy-out clause. By all accounts, Messi didn't sign it at gunpoint.

Forget about the likes of ultra-brands Manchester City and Paris St-Germain taking a punt. At that price, there are national teams that'd cringe.

Ronald Koeman's been brought in to restore Barça's luster, and he's obviously made a point of calling Messi a cornerstone of his plans.

He just needs the Argentine to buy into it.

Odds are, though, that since nobody's gonna buy into Messi at €700million, dude doesn't really have any choice.