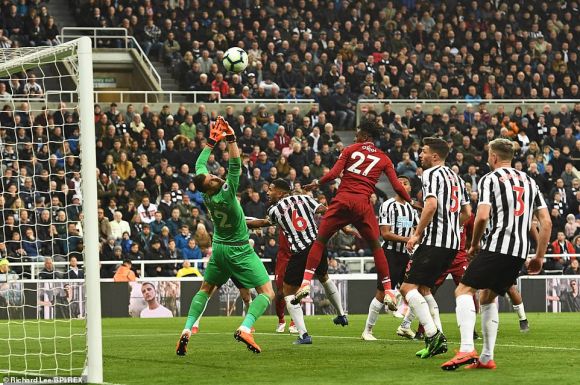 The insanely entertaining head-to-head title race between Liverpool and Manchester City has now seen the Reds hold serve yet again.

Dudes left it late but picked up an 86th-minute goal to seal a 2-3 victory at St James's Park over the feisty Magpies.

In the process, they watched Mohamed Salah exit on a stretcher after a mid-air collision with Newcastle 'keeper Martin Dúbravka. It was serious enough to necessitate a trip to the hospital.

Rafael Benitez had his crew ready to go for this one. After all, most were still playing for their jobs, and they came thisclose to damn near dashing the 'Pool's title hopes.

In early stages, Jürgen Klopp's charges had an insight into how this one was gonna go. It wouldn't be easy. Newcastle were attacking, and the atmosphere at the ground was just impressive.

However, Liverpool responded to the early pressing with a Virgil van Dijk header. In the 13th minute, Trent Alexander-Arnold's corner found him unmarked, and that was that:

Matt Ritchie picked out Salomon Rondon inside the box. The Venezuelan striker's attempt ultimately deflected back to Atsu, who drilled the opportunity past Alisson Becker from close-range:

The emboldened hosts grew in the game and had their chances immediatly after that goal. The Reds seemed staggered, but only for a moment.

It's not for nothing they're in a title race. Dudes know how to bounce back quickly.

It only took a mere ten minutes, and they were on the board again.

Daniel Sturridge's backheel pass found Trent, who perfectly crossed it to Mohamed Salah for a gimme:

Former Red Javier Manquillo found Rondon, who smashed the back of the net with a powerful finish from inside the area:

After that, the game's drama rose to another level.

Getting sandwiched like that, dude's noggin had nowhere to go.

As fate would have it, Klopp then introduced Divock Origi as his second sub on the day. Xherdan Shaqiri had entered in the 66th minute.

After a silly Ayoze Pérez foul on Fabinho down the right side, Liverpool's title hopes emerged once again. Shaqiri stepped up in the 86th minute and perfectly crossed it to Origi, who nodded the winner home:

The referee added and excruciating eight minutes due to the Salah injury, butthe  resilient Reds held on to post a dramatic away win.

Thus, their leapfrog at the top with the Citizens continues:

It's all up to the last match day next Sunday.

Salah will definitely miss Liverpool's long-odds second-leg fixture with Barcelona on Tue 7 May. No word yet on whether he'll be fit for Sunday. 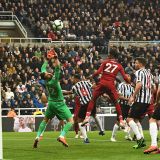 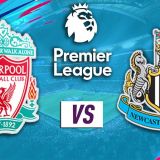