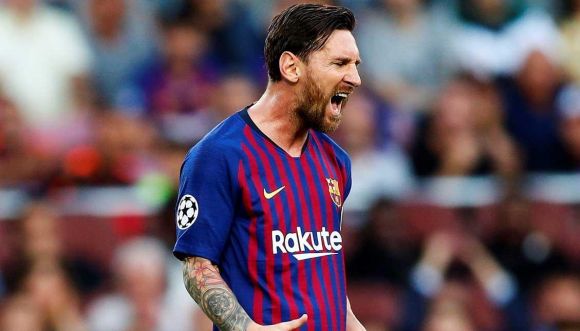 For fans at Camp Nou, this never gets old.

Every time Barcelona hosts a match -- like in the Champions League -- they damn near expect a bitta magic outta Lionel Messi.

Seems like they get it more often than not, too, like the goal that gave him his brace as Barça saw off Liverpool, 3-0, in the semi-finals' first leg.

Catalans will be speaking of this until the Atomic Flea takes to the pitch again. Maybe longer.

The Blaugrana seemed to come on in waves right from the kickoff, at times pinning the 'Pool in their own end.

And yet, the Reds held their own and even found a chance or two to nick a crucial away goal, but it was not to be.

Instead, it was Barça who broke the deadlock in the 26th minute. Jordi Alba was sent down the left wing and picked out Luis Süarez with a low cross. The Uruguayan striker anticipated Virgil van Dijk's resistance, beat it, and sent a sliding shot past Alisson Becker:

After the break, Liverpool again seemed they'd level and possibly turn the momentum around. Sadio Mané had already squandered a golden opportunity in the first half and, later in the second, Mohamed Salah hit a post after a goal-line clearance fell to him.

When Barcelona seemed outta gas is when the magical Messi put his pedal to the metal.

In the 75th, the Argentine drove forward but was tackled by Fabinho at the edge of the box. The ball ended up with Süarez, whose close-range finish was denied by the crossbar. However, as so often happens, the ball ricocheted back to Messi, who merely had a tap-in to perform:

Putting it mildly, Liverpool's been known to work a miracle or two themselves at Anfield.

The second leg in this one, though, would need the Reds to do a football equivalent of walking on water.