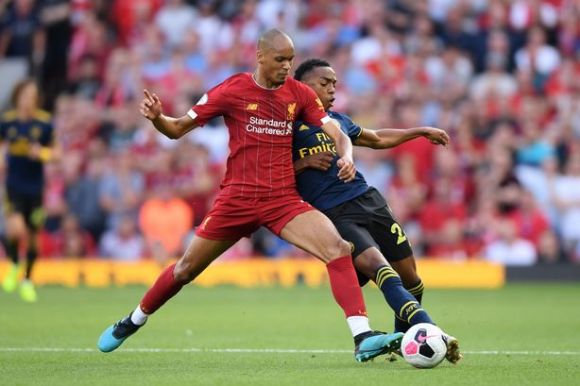 The reigning European champions may not score enough goals to go around, but they've got dudes who can deny the opponents.

One of these likeliest heroes is Fabinho, who puts the lie to bilge that Liverpool's midfield is Jürgen Klopp's Achilles heel.

Amidst the Reds' internal bickering at Burnley in their 0-3 victory over the Clarets, the Brazilian's skillset and game management made him an unsung hero yet again.

With Manchester City taking care of business against Brighton & Hove Albion, the 'Pool had to win if they wanted to regain the Premiership lead. They did so through goals from Christopher Wood - own goal -, Sadio Mané, and Roberto Firmino.

After almost conceding an early goal, Liverpool got serious, wresting control of the game and rarely giving Burnley another sniff.

Mohamed Salah came close to opening the scoring on 21 minutes, so opening honors went to Trent Alexander-Arnold in the 33rd when his cross deflected off the unfortunate Wood right past goalkeeper Nick Pope:

One became two when, four minutes later, Firmino intercepted a poor pass down the middle, drove forward, and dished to Mané.

The Senegalese striker lit it up with a beautiful finish.

Liverpool's dominance was easily seen in Fabinho's stat line, with entries like this:

Meanwhile, all that was left was for sparks to fly.

First, in the 80th minute, Salah powered down the left and dished to unmarked Firmino on the edge of the box. The Brazilian slotted a first time effort into the bottom corner, notching his 50th goal for the Reds:

Not everyone wearing read felt warm-&-fuzzy, though.

Seems that Mané was upset that Salah's pass didn't go to him, and he made an issue of when when Klopp subbed him out in the 85th minute.

Klopp laughed it off afterwards, of course, saying he likes players who express their emotions.

Odds are, though, that when the club returns to practice. the German meister will express a few of his own over the incident.