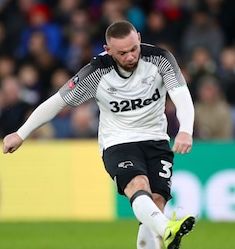 It's a famous seamhead quote, but in reality, it applies to virtually every professional sport:

You spend a good piece of your life gripping a baseball, and in the end, it turns out that it was the other way around all the time.

Seems like Wayne Rooney was the latest to discover this.

It's still surreal that he'd re-up with a Championship side at this stage of his life, but there it is.

Derby County isn't complaining, not even about the part of his contract saying he'd join the club in January after completing all obligations to the MLS side DC United.

Rams supporters no doubt consider it to be a belated Christmas present.

It didn't take the former Manchester United captain to become the gift that keeps on giving, either.

Rooney jumped right into the thick of things, controlling the midfield at Selhurst Park as County eliminated Crystal Palace from the FA Cup with a well-earned 1-0 victory.

OG triggered the play that resulted in Chris Martin's goal on the half-hour:

Rooney constantly and accurately set the table for his teammates, dropping deep in midfield to draw the measure of County's forward movement and dictating the play.

If the criteria for being a superstar involves making those around you a better performer -- and it does -- then he's still got it.

This match was notable for more than Rooney's debut with the Rams.

It was also the first time -- and about time, too -- that the VAR was used by a referee to determine whether a red card should be issued. There have long been calls for this, and it took an official with enough bottle to actually resort to it.

Michael Oliver is that sorta referee.

To no one's surprise, the Eagles don't play very well with only 10 men. County was unlucky not to have scored more.

Palace thus becomes the third Premiership side to exit in the third round, joining Brighton and Everton. The Toffs at least left with dignity, as they were eliminated by Liverpool.

Derby County, of course, marches on, fortified by an addition that's got to have all involved pinching themselves now that it's come to be.