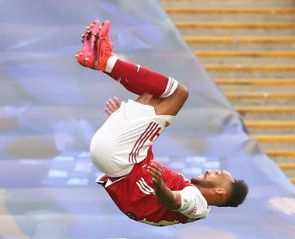 The 130th battle for football's oldest trophy was also one of the eeriest.

Before a paid attendance of 0 and crowd noise only heard by TV viewers for effect, the Arsenal picked up its 14th FA Cup and third in five years with a 2-1 triumph of a Chelsea XI -- later to be X -- and thus securing a Europa League qualifier spot.

Even sweeter for the Gunners is the fact they also knocked the Premiership's 6th-placed and North Side rivals Tottenham Hotspur outta Europe by doing so.

The sides appeared to be mirror images of each other, both opening in 3-4-3's and waiting for moments of brilliance from their star strikers.

Christian Pulisic has well and truly come into his own -- and with a higher ceiling that may soon be realized -- when he put the Blues on the board in the fifth minute. Mason Mount started the spiffy little build up by centering to Olivier Giroud, whose backheel found the American prodigy cutting through behind him and quickly finding nylon:

The bummer was dude pulled up lame just after the halftime break and couldn't continue. Huge loss.

Adding to manager Frank Lampard's woes was crafty captain César Azpilicueta going down to a hard foul in the 35th minute, which gave him no more time to atone for his gridiron-style tackle on Pierre-Emerick Aubameyang seven minutes prior that rightly called for a shot from the spot:

So, Chelsea was down two starters before the half, and it'd get worse after that.

Where midfielders Jorginho and Mateo Kovačić were in command of their realm for most of the first 45, Arsenal's high-pressing tactics began to show some bite of its own.

It came together for the Gunners in the 67th minute when a counter found Héctor Bellerín scamping down through Blues with the ball ultimately finding its way once again to the pride of Gabon, who put his crew ahead:

A harsh decision hampered any thought of a dramatic finish when Kovačić picked up a second yellow for a tackle in the 73rd minute on Granit Xhaka that looked damn near like any other vanilla challenge one would expect in football games at any level:

It also all but took the air outta the match.

Full marks to Arsenal, though. The second half was theirs, and they did enough in the first to be level with the Blues.

Kudos, too, to manager Mikel Arteta, who whipped the Gunners into sufficient shape -- especially their long-suffering defense -- to actually kindle thoughts of returning them to glory. This victory is now Exhibit A.

They may have scoffed at a spot in the Europa League competion a few years ago, but right now, as well as hoisting the hardware here, they'll take it in a heartbeat.