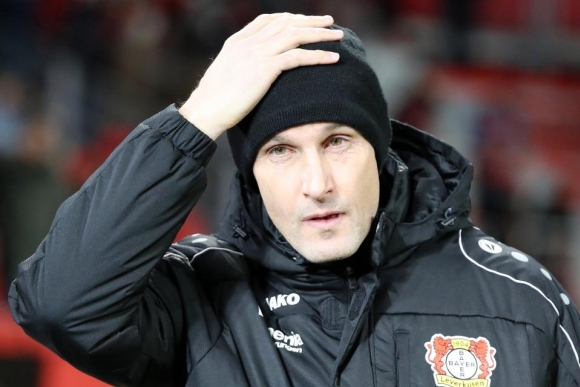 Since when did Deutschland move to southern Europe?

Not to sound too chauvinistic, but if a philosophical conversation would ever turn to who'd take flopping in football to creative new heights, the first conference that'd come to mind might be one from Portugal, Spain, and/or Italy.

Die Werkself is a proud club, formed in 1904, and is better than what Herrlich has done in its match against Borussia Mönchengladbach.

How did he figure he could take a dive from the touchline and get away with it?

Seriously, turn in your passport.

Quite rightly, the German FA is taking a hard look at obvious evidence, and a ban must be the only result.

There was at least some premeditation put into this.

Herrlich's eyes were fixed on the referee and his angle vis-à-vis the position of 'Gladbach's Denis Zakaria.

In this day and age, with cameras everywhere and the Bundesliga drawing a worldwide TV audience, how could he not know someone would have a better view and it'd go viral?

This is definitely a reputation denter.

As the Scots say, you may be Angus the carpenter for 20 years, but spend a stolen moment with one sheep ...