Arsenal, Chelsea Make It a London Derby in the FA Cup 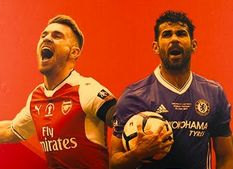 It's kinda weird that this stuff could happen as late as the FA Cup semi-finals:

It's kinda weirder that they were both Manchester's big brands, too.

Safe to say that neither approach worked.

Yes, 2020 will go down in the sporting annals as one of the weirdest in history, but what in the name of Sir Stanley Matthews were City and United thinking?

It got to the point of re-checking the fixture list to confirm these were indeed the FA Cup semifinals.

It's been the sorta season for Manchester City that only money could save, which it did when ownership's petrodollars bailed it outta that two-year Champions League ban.

Still, that episode hung over the club all season long like a bad fart.

One woulda thought that with major hardware on the line in a match against a defense-optional Gunner crew, City'd be geared for glory.

Meanwhile, it could well be United manager Ole Gunnar Solskjær's seen Spanish international David de Gea confirm he really is past his prime.

Dude treated the ball like a greased pig at exactly the time his teammates coulda used a bitta inspiration.

So, instead of an all-Mancunian FA Cup final or even one where it's England's biggest vs second-biggest cities having a representative in the nation's most illustrious match, it'll be a pair of London big brands duking it out before a worldwide television audience and a stadium full of no one.

Full marks to Arsenal and Chelsea, though. They showed up.