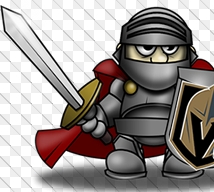 Sometime this coming November or December, the NHL's newest team expects -- not hopes, but expects -- to avoid a 42-years-and-counting league lowlight.

It's held by the 1974-1975 Washington Capitals, who in their expansion season underwhelmed the sports world by posting an 8-67-5 record for a measly 21 points.

Gotta plumb the darkest depths to find an equivalent. Like this:

The cherry on top? OJ Simpson.

At least no one on that hapless '74-'75 Caps team screwed up the '94 NBA Finals coverage by leading a parade down an LA freeway.

Not sure what's more shocking there:

In a way, all of that sorta ties into the dullard thinking that also prevailed in NHL leadership back then. They'd managed to turn one of the most explosive eras in the game's history into a selfish, money-grubbing OG club.

Actually, morphing would be a better term.

Undersold? Maybe, but odds are that's all they could squeeze outta 1%ers eager for a sports toy back then. It was a sorta thing that didn't always work out.

Clearly, as the Scouts-Rockies-Devils episodes showed, the NHL's governors didn't give a damn about what the on-ice product was. They just wanted the up-front cash boost.

But as Lou Reed so adeptly sang in Sweet Jane, those were different times.

Back then, the leagues called every shot. Expansion owners took what was doled out to them, like it or lump it.

Now, with the NHL demanding and getting $500million in fees to bring the Vegas Golden Knights to life, kajillionaire owner Bill Foley wants some value now for his investment.

Fortunately for him, the league has two solid reasons to accommodate his demand:

GM George McPhee got Vegas off to a rousing start, quickly and obviously picking a proven commodity between the pipes:

The expansion draft rules made more quality players available than ever before, as evidenced by the Nashville Predators' winger James Neal and Ottawa blueliner Marc Methot. They could form a credible roster core or be useful bargaining chips.

Right now, they head a list of decent names.

McPhee's been wheeling and dealing already, stocking up on draft picks and landing an impressive trio of first-rounders in the entry draft. One of them will need a bit more exposure to his new digs:

Going into that draft, McPhee was already pleased with his results:

Dude isn't prone to exaggeration, so those are strong words.

Then again, with Arizona and Vancouver in the Pacific Division, the Golden Knights have a decent shot at not finishing last.

Florida holds the NHL's best first-season record for expansion teams, going 33-34-17 for 83 points in a time when there were no overtime losses garnering a point. However, they did it by deploying a stifling trap. That's not gonna put patooties in the arena's seats in Sin City.

Interestingly enough, Vegas' coach is Gerard Gallant, who figured prominently in the Panthers' current rise to playoff contention with an attacking strategy.

And McPhee's last GM job was in Washington, where he engineered the Caps' transition from sad sacks to top whacks but paid for not getting them to hockey Valhalla.

Both now have a shot at finishing what they started elsewhere. They seem to like their chances at near-term success.

And for $500million, Bill Foley is expecting it.