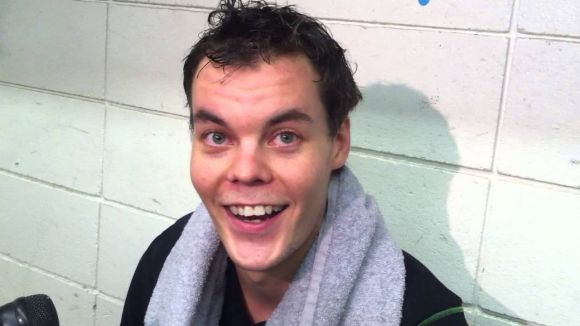 Under normal circumstances, the NHL post-season is delightfully entertaining, practically oozing drama-soaked Games 7 in every single round.

Sadly though, the modern day dystopia we find ourselves in isn't really conducive to this sort of hockey.

The grim alternative is being staged in a hermetically sealed bubble utterly devoid of fans or a pulse.

Of course, Gary Bettman would just assume not discuss this fact, but a hero by the name of Tuukka Rask didn't get that memo or possibly just doesn't care.

After Boston dropped a 3-2 decision to the Carolina Hurricanes in the first round of the playoffs, the Bruins' minder of nets got quite real with the media via Zoom:

Here are Tuukka Rask's full comments on the atmosphere up in Toronto: pic.twitter.com/5qQU4BDA3N

The industry term for that spiel would be brutally honest.

Yep, dude absolutely compared this pseudo post-season to a series of exhibition games, a sentiment the league office and networks will surely have monogrammed on matching his-&-her commemorative towels as soon as possible.

But Tuukka was just getting warmed up.

Realizing he hadn't yet alienated his own fan base, the longtime B's goalie provided the following answer to a media query:

Tuukka Rask says he's "not in prime shape" after 4 months off & he's just "trying to have fun" after the Bruins Game 2 loss... 😬@MercedesBenz pic.twitter.com/wZYwB91JwJ

That cringe emoji has never been more appropriate.

Hey, let's see how a random sampling of Bruins ffaithful consumed these remarks, just for shits and giggles:

Not a good look, Tuukka. A professional athlete claiming that he is possibly not in tip top shape is unacceptable and inexcusable.

Wow.....The media and sports radio are gonna have a field day with those answers. #PlayoffHockey

Bench him. Trade him.

Andy is a man of few words.

And even his most ardent supporters are dubious:

I support Rask, rail against the haters and think he is an excellent goalie...but these comments are alarming. I hope this was somehow out of context.

Again, Rask seemed to know exactly what he was saying and how it would be received.

The crippling malaise of the bubble has consumed him completely.

Perhaps Tuukka will discuss his belief system, or lack thereof, after Game 3.