Published on 8-Aug-2020 by Alan Adamsson 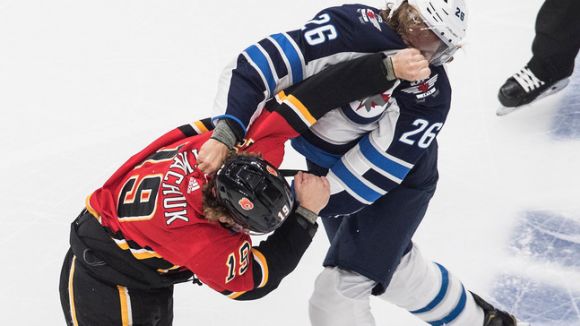 The NHL made a wise move by staging its two playoff bubbles in a country that's got a handle on stifling Covid-19.

It's early days yet, but so far, there hasn't even been a hint to those pesky little spheres of sickness anywhere near the playoff action.

But there's been action aplenty, and not of the social distancing kind.

Safe to say that a hella lot more than gloves have been dropping in the Great White North:

It'd be fair to question Nathan Beaulieu's sanity, taking on all 6-3 and 241lb of renowned pugilist Milan Lucic, especially since his 6-2 frame is generously listed at a mere 205lb.

However, with no fans to hype the players' emotions in what's already the most testorone-laced playoff competition in all of sports, something was sure to step up and ingnite those intense flames of passion.

Where football's a collision sport, hockey's a contact sport, and when push comes to shove -- literally -- more contact ensues.

Dudes aren't even waiting around to get mad at each other. If there's a hint of a possibility that giving one's body up for meat will inspire teammates, it's on.

On and often, too.

This bout between seasoned veteran Jason Spezza and Swiss blueliner Dean Kukan is already Fight No 8 in what has to be one the strangest Stanley Cup playoffs ever and most certainly in recent times.

As evidence, that total's more than triple of what went down in all of last season's playoff games combined.

In that one, suffice to say Kukan at least saw what was coming this time, which hasn't always been the case for him in this particular bubble:

There hasn't been a top-billing rivalry on the level of a Kassian-Tkachuk pairing yet, but Blake Wheeler did his best to fill in for the Oil's big hitter.

That's not to say it's gonna stand up as a classic, but dude was basically doing his duty as a captain by standing up for Mark Scheifele, who Tkachuk drilled into the boards with a hit that -- no matter how you look at it -- wasn't very nice.

Wheeler admitted after the game he really didn't see the hit, but hell, news travels fast in those cases, especially when it's even easier to hear the bench with no fans in attendance.

As teams advance through the rounds and get closer to the Cup, it's an open question as to whether this trend will continue.

Unnecessary penalties in high-value games like those have been frowned upon in recent seasons, but then again, the timing of these fights -- early to set the tone and whenever appropriate to send a message -- in a bubble devoid of other emotion may not be considered as indulgent right now.

Ironically, the Philadelphia Flyers have been notably quiet in this regard, at least so far.

They're still the holders of just possibly the most consequential playoff fight in history, complements of notorious enforcer Dave Schultz.

His hammering of the New York Rangers' Dale Rolfe in their Stanley Cup semi-final's Game 7 was considered to be the turning point that ultimately led to the Broad Street Bullies hoisting the hardware for the first time in franchise history.

As Lou Reed so aptly stated in Sweet Jane, these are different times.

But this is a really different playoff atmosphere. All bets are off in just about every possibility.

How many gloves keep coming off, then, is up for conjecture.