Sweet! Drew Doughty and Matthew Tkachuk Are at It Again 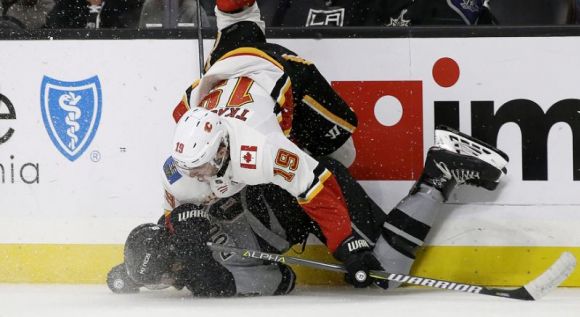 When we last checked in on the most entertaining personal rivalry in the NHL, Drew Doughty and Matthew Tkachuk were snapping at each other in the media before a game in Calgary.

That night, the Los Angeles Kings prevailed in OT, courtesy of a Doughty game-winner and subsequent troll job at the Saddledome.

Fortunately for those of us who enjoy such things, these two rabble-rousers hooked up once more this past weekend, this time on the West Coast.

It was nice and tranquil for a while though, with the Kings building a comfy 4-0 advantage into the third period.

But you just knew it was coming, and sure enough, the dastardly duo found each other:

That was well worth the wait.

Doughty is just deliciously evil, as that toothless grin after the scrum clearly suggested he knew precisely what he was doing.

Meanwhile, Tkachuk picked up three separate penalties and left the ice, much to the delight of the Kings faithful.

We should also acknowledge the fine work of Flames defenseman Mark Giordano, who catapulted himself into the pile and destroyed the Kings' Kyle Clifford.

If we learned anything from the Flames-Kings game last night it’s that we’re all united in our love of Mark Giordano pic.twitter.com/s1xQUz7Hby

We'll let our friends at Jomboy Media finish this thing off with a thorough breakdown:

In case you're wondering, the Kings and Flames meet again in early December.