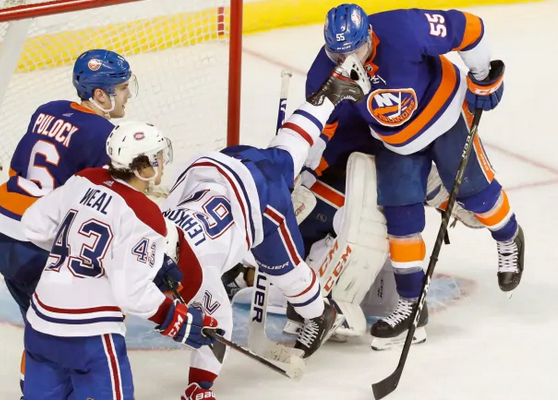 Fortunately, the list of accidents in sports that can be immediately life-threatening isn't a long one.

That doesn't make it any less ominous:

From that perspective, what happened to New York Islanders defenseman Johnny Boychuk during their game against Montréal was beyond scary:

Isles' GM -- and Prez of All Things Hockey -- Lou Lamoriello did the usual hockey thing and gave a hockey slant on the fact that Boychuk was damn lucky not to lose an eye:

Boychuk Injury Update from Lou Lamoriello: “Johnny Boychuk is ok. Fortunately the skate blade just got the eyelid. It took 90 stitches for a plastic surgeon to fix. But he’ll be fine.” #Isles pic.twitter.com/vYfsx9MAYO

Yesiree. They were small stitches.

Good to know that among the fans' well wishes, there were words of encouragement for the veteran blueliner's recovery:

If only I was rich instead of so damn good looking 😉 #isles pic.twitter.com/JmYj1EvW4O

#Flames forward Milan Lucic is best friends with Johnny Boychuk and he texted him right away after he saw the injury. Boychuk texted him back right away. Throughout his career, dude's never been afraid to go where angels fear to tread.

He's had his share of close calls, such as last season against the Toronto Maple Leafs when Mitch Marner's blade kicked up during a Boychuk check:

Just over a month prior to that, dude fearlessly stopped a New York Rangers' shot with his face:

It's just that every point counts if you wanna make the post-season and challenge for the Cup.

Dude might even be getting experience for a job after hockey:

If so, he's in the right place.

Until then, all anyone needs to know is Boychuk's a hockey player. Expect to see him in a rink near you.